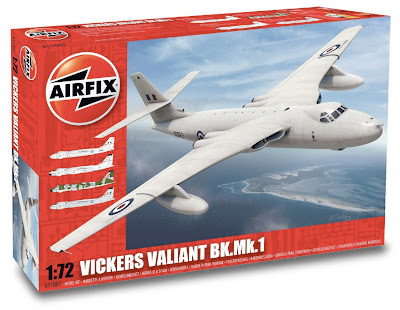 SMN report
The Airfix 2011 catalogue promised the Valiant earlier this year (SMN story here), and the 1:72 scale kit is now coming in to land, with general sales expected around May 10. The subject is the four-engine Vickers-Armstrong Valiant jet bomber, developed after World War II to counter the Soviet threat in the early days of the Cold War. The swept-wing Valiant was the first design to fly of the ‘V-Force’, three British bombers designed to penetrate Soviet airspace and deliver nuclear weapons in the event of the Cold War turning hot.
In the model world, there has been little shortage of the other two V-bombers, the dramatic-looking Handley-Page Victor, and the big-delta Avro Vulcan, but the comparatively no-frills Valiant has been something of a Cinderella. Still, here we are now with what looks a very interesting kit indeed. 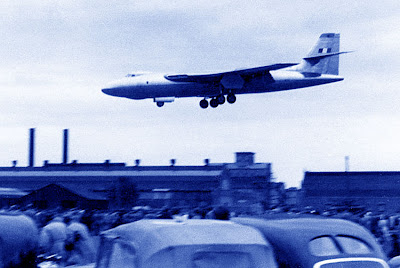 Prototype Valiant about to land at the UK Farnborough Air Show, 1951.

What’s in the box

Boxed in the Airfix latest style, there are 142 components to this 1:72 scale kit of the BK Mk1 version. It should build into a decent sized model, with a wingspan of 488 mm (19.2 in) and length of 456 mm (17.9 in). Detailed undercarriage parts show off the Valiant’s relatively unusual tandem-layout mainwheels, while under the wings are slung the large tanks which boosted the Valiant’s range. Airfix has included decals for four different aircraft, and as now seems to be standard practise, the schemes are available as detailed pdf downloads from the Airfix site. 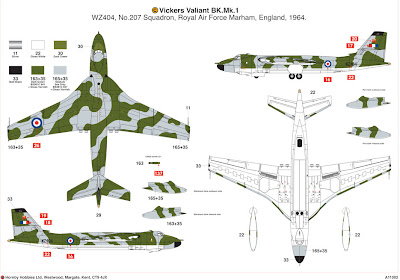 Marking schemes available as downloads from Airfix.
Other kits

There have been Valiants before, including the 1:144 scale diecast from Corgi, and kits from Contrail and Mach 2, but this is a mainstream injection kit, and it looks to be well worthwhile. We’re in the queue for this, the BK1 version of the first RAF aircraft to drop a live UK atomic bomb, on test in 1956. 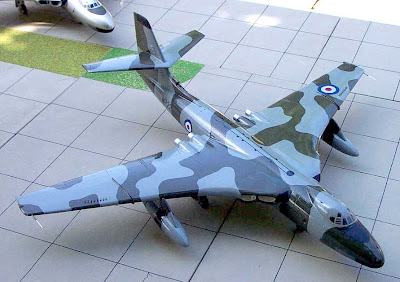