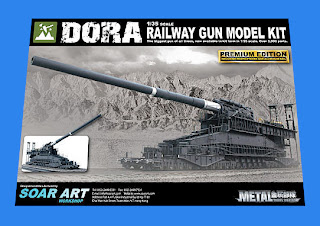 SMN Report
Looks like we have a conclusion to the ‘world’s biggest kit’ discussion, and the answer has to be the model world’s reproduction of a World War II mobile gun that was an extraordinary engineering feat, but in military terms, little more than an expensive joke.
Of the kit, Mat Irvine says: “On reflection, the Italeri boat isn't the largest 1:35 scale kit - that has to go to the Metal Troops Creation Dora German rail gun. It's about 4 feet long, maybe 5 - and with 3000 parts it probably counts as the most number of parts in a kit - period.”
“I think Italeri will have to be content with "largest 1:35 scale boat kit....”

Assembling the full-scale Dora
Now whether you have time to put together those thousands of components is up to you, but the real thing needed considerably more in the way of resources before it was ready to fire even a single shot. A 2000-strong team was required to assemble the gun at its firing site, and a double-row of parallel rail tracks had to be laid there to take the more than 1300-tonne weight of the beast. Dora was aimed by moving it backwards and forwards along the rails, perhaps just a finger-length at a time, to get the precision shooting required to hit a target that was far beyond the horizon. 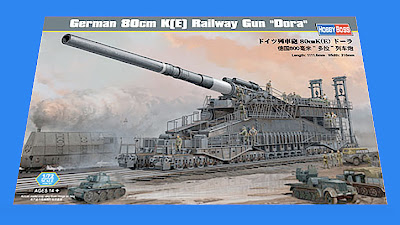 Shoot to kill
Once assembled, a 250-strong gun crew was needed, all so Dora could lob a 7-tonne shell up to 29 miles (47 km), but at a maximum rate of just two shots an hour, though each shell could punch a 30 ft (10 m) hole into the target zone. This was well before computerized tracking systems were developed, so aiming the monster weapon was very much a suck-it-and-see manual affair, to be followed up by a spotter plane mission to check where each shell had actually landed.
In all, Dora fired just 48 rounds in anger, and was pretty much a monument to misplaced military effort and energy.
As for building a scale Dora, there is also a 1:72 scale kit available from Hobby Boss, while Fujimi makes a 1:144 version.
Lots of info on the Dora at Vince’s Worthwhile Website here.
Buy the 1:35 Dora here.
And on eBay here.
The Hobby Boss 1:72 scale kit is here.
A review and link to the Fujimi 1:144 scale kit is here.
Email ThisBlogThis!Share to TwitterShare to FacebookShare to Pinterest
Labels: Dora, Fujimi, Hobby Boss, Metal Troops Creation, railgun
Newer Post Older Post Home