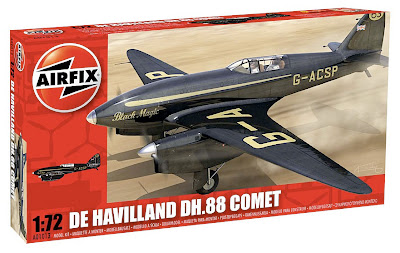 Mat Irvine builds a 1934 racing aircraft
When this kit was first issued it was regarded as a pretty nice little model of the aircraft that won the 1934 England to Australia MacRobertson Air Race. The slight trouble today is that the Airfix DH.88 was released more than half a century ago, in 1957, and things in the kit world have moved on considerably since then! 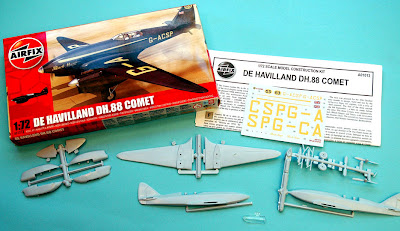 Inside the box
In 1957 you tended to get one-piece wings, no cockpit detail, and a very simplified approach to kit building - and with this latest DH.88 nothing has really changed. In fact, the only detectable tooling changes with this new kit are that part numbers have been added to the runners!
But having said that, with a few modifications the 24-part kit can be made to look reasonable, and this is greatly helped as - and this is for the first time - instead of the best known version, the bright-red Grosvenor House, the decals are for another of the original three Air Race planes, Black Magic, which was stunningly finished in gloss black with gold markings. 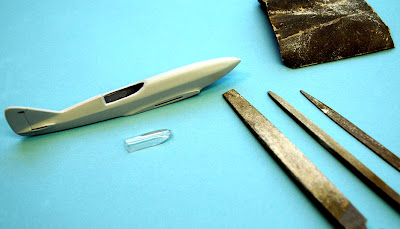 Building the Airfix DH.88
For the build I’m showing you here, the cockpit, with ‘built-in pilot busts’ - yes this is what you used to get - was cut out, and although seats and details could have been added, they weren’t on this model, which was intended as a ‘quick conversion’. Anyway, the area under the cockpit canopy is so small that it’s not really noticeable. Two pitot tubes were added, using thin wire, to wing and rudder and the extreme tip of the nose was removed. A clear part (from the ‘car lamps’ spares box) was fitted as the landing light. The bulk of the aircraft was finished in gloss black, with propellers and undercarriage legs in silver. The canopy framing was trimmed with thin black tape, actually intended as pin-striping on model racing cars. Finally, the Airfix-supplied gold decals were applied. 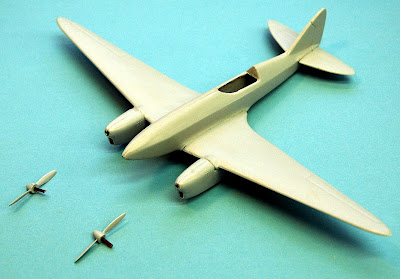 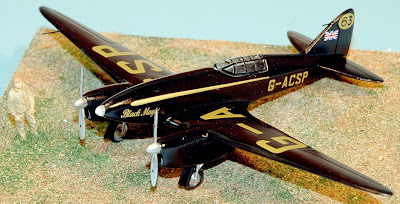 Displaying the finished aircraft
For display purposes, I added a base borrowed from a display for the Frog Bleriot cross-Channel monoplane - and the Louis Bleriot figure was left over. As used here to indicate scale, he’s a useful addition, even if his 1909 flying gear does not come up to the sartorial standards of the daredevil long-distance pilots of the 1934 MacRobertson Air Race!
So, a simple build of a very simple kit, but one that shows you can produce a perfectly reasonable result from what is, after all, a very basic box of bits. 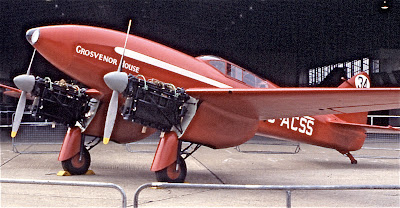 The real aircraft at Farnborough
Here are a couple of pix I took at the Farnborough Air Show some time ago. This is the race winner Grosvenor House, and you can clearly see those slimline de Havilland Gypsy Six engines, exposed for routine servicing. What a delightful machine!
The Airfix DH.88 Comet Racer is available here. 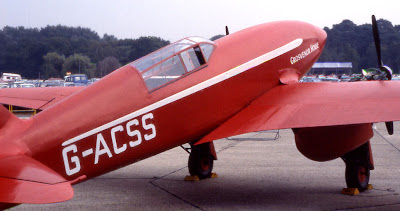 Thanks to Airfix for the review kit
The pictures show, top to bottom:
1-2  The box, and what you get inside, moulded in Airfix’s usual light grey plastic.
3  Removing the odd (for today, but common in the 1950s!) built-in pilot figures.
4  Shaping the new cockpit, now open to receive the canopy.
5  The main bodywork now assembled. The propellers have new pieces of rod fitted, ignoring the pins that allow them ‘to rotate’.
6  The finished DH.88 Comet Racer in Black Magic markings. Note Louis Bleriot, standing in his cross-Channel flying gear.