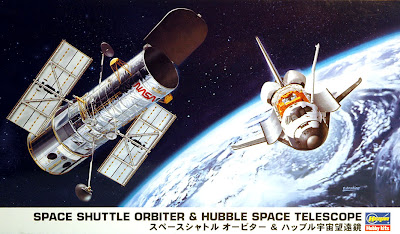 Mat Irvine sees stars
Getting a new lease of life out of an existing kit is hardly unusual, and this is precisely what Hasegawa has done with its 1:200 scale Space Shuttle Orbiter kit, by adding what was the Shuttle’s largest single payload, the Hubble Space Telescope (HST). What is odd, given the number of Orbiter kits and the importance of this particular space observatory, is that no-one has done this before. 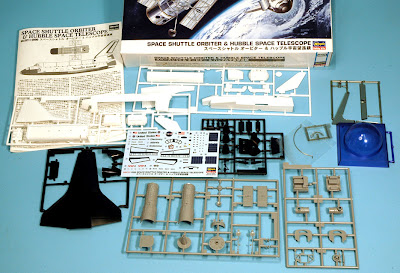 A multi-coloured kit, split usefully into related groups. The runner of grey components is newly produced for this kit.

Space-saving scale
The use of 1:200 scale is based on the simple fact that Hasegawa uses this scale for its airliner kits, rather like Airfix choosing 1:144 scale for its rockets and airliners. However, the scale does mean a small and somewhat simplified kit, but it’s none the less worthy for that, and has the advantage (given the recent article about displaying models) that it takes up minimal shelf space! 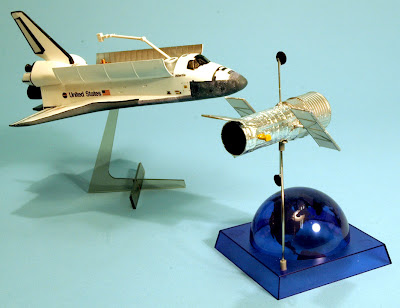 The two primary configurations on their respective stands.
You have two options - build the HST as a free flyer, perched on the same type of base that Hasegawa supplies for its cartoon-style Egg Planes, with the Orbiter separate. Or you can attach the HST to the Orbiter’s cargo bay cradle, as was the case during servicing missions.
Which mission?
The HST was involved with six Shuttle missions, the first for launch, STS-31 (Discovery) in 1990. Then there were five Service Missions, somewhat confusingly numbered 1, 2, 3A, 3B and 4. However, only the last two are relevant here, as Hasegawa’s HST solar panel configuration matches only STS-109 (Columbia) in March 2002, or STS-125 (Atlantis) in May 2009, the final Service Mission. 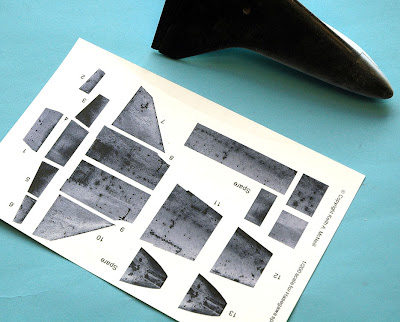 The decal photo-sheet is split into convenient sections.
Challenge of the tiles
The way in which the heat-resistant tiles on the Orbiters can be represented has long challenged modellers to get them looking correct. To this end, several manufacturers have made sets of decals that do much of the hard work. Most of these are these are no longer available, but as they used computerized designs, they were rather ‘too precise’. 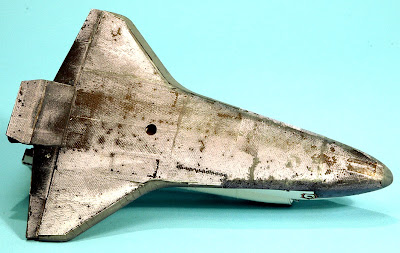 Tiles applied, looking extremely used. The big hole is for the stand!
Photo solution
But there is another solution - space model expert Keith McNeill has cleverly taken actual Orbiter images, and hence the correct tile pattern, (or perhaps to be more precise, ‘one of’ the correct tile patterns), and converted them into decal form. Keith will make them to order - check his website below - and in most of the common Orbiter scales, so you just need to choose. A set in 1:200 scale was used here, and they look very effective - mainly because they are photos of the real thing! 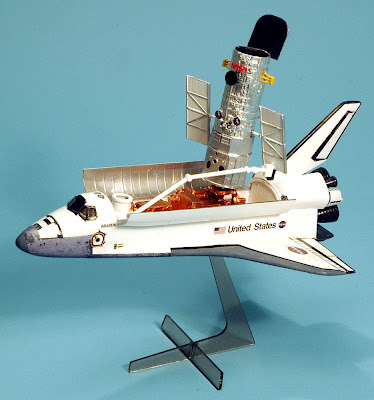