REMEMBER THE HUGE DORA RAILWAY GUN? HERE’S THE MAN WHO MADE THE MASSIVE MASTERPIECE SMN Report
Mat Irvine recently provided pictures of the huge 1:35 scale Metal Troops Creation Dora German railway gun, on display at the 2008 ModelKraft show. Said Mat: “It's about 4 feet long, maybe 5 - and with 3000 parts it probably counts as the most number of parts in a kit - period.”
Monster gun builder
We may have featured the Dora but we didn’t know who built it. Now we do, so SMN thanks the builder, Simon Boness, who is wearing the red top in Mat’s picture above, while sitting behind the monster gun is Bob McIntosh. Impracticable weapons
The Dora was another of Hitler’s weird weapons that diverted resources away from more useful and practical weaponry. No wonder he lost World War II, with creations such as this, or indeed the Me 262 jet fighter, which was far and away the fastest thing in European skies - so Hitler slowed it down by insisting on a bomber version! 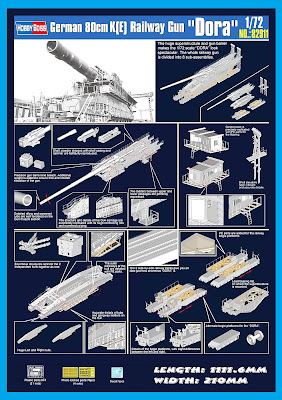 Different Doras
As for building the Metal Troops Creation Dora, we say well done Simon: it’s an impressive piece of work. Not forgetting of course, that there are other Doras out there if you don’t have room for the MTC monster. These include the (still large) HobbyBoss version, to 1:72 scale (picture above of HB’s info sheet) and the relatively dinky Fujimi kit to 1:144 scale.
Thanks to 'abbadom' for the impressive cgi Dora image.
Visit the MTC 1:35 Dora here.
HobbyBoss 1:72 scale kit here.
Review and link to the Fujimi 1:144 scale kit here.
Simon's Bedford Model Club here.
Email ThisBlogThis!Share to TwitterShare to FacebookShare to Pinterest
Labels: Dora, Fujimi, HobbyBoss, Metal Troops Creation, railgun
Newer Post Older Post Home