SMN report
Hasegawa presents us with some good stuff this month, including the two-in-one Heinkel He111Z, created by mating two He111 airframes with a new centre-wing section and an extra, fifth engine. The He111Z was designed primarily as an air tug for the massive Messerschmitt Me321 Gigant heavy-lift military glider, but even five engines were not enough for the job - there was simply not enough power to haul a fully-loaded Me321 off the ground. Various solutions were tried, including the use of rocket pods to boost thrust at takeoff. 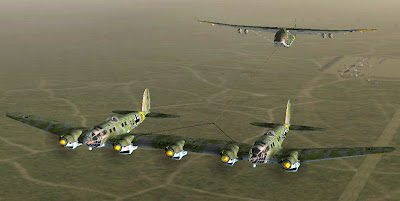 The He111Z in flight
Despite its oddball design, the He111Z was surprisingly successful in flight, with handling that was rated highly by pilots, who sat in the port fuselage. A normal flight crew was seven, including a gunner, observer, and mechanic who sat in the starboard fuselage.
Hasegawa’s 1:72 scale rendering of the He111Z is a good one with 228 parts and, very interestingly, contains two sets of decals, one of which is a fictional ‘what if’ Russian Front set. It seems as if a bunch of alternate-history fans worked on this kit, perhaps fans of Hasegawa's popular Maschinen Krieger science-fiction line. 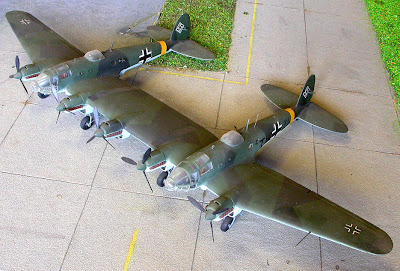 Alternative kits
Hasegawa is not alone in modelling the 111Z of course - Italeri also has a 1:72 scale version, and there’s not a lot to choose between the two kits. You can choose the one that takes your fancy, as either will assemble into a decent model of this World War II aviation oddity.

More kits to choose
Other Hasegawa items this month include a blue-and-mauve 176-part F-14D Tomcat in the fictional markings sported by a fighter used in the popular Ace Combat flight-sim computer game. A bit of a strange one this, but she looks very pretty! It seems that Hasegawa reckons there’s a market for this sort of thing though, as apparently more than 10 million people around the world have bought the game to play.