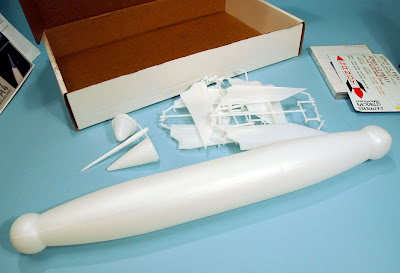 Mat Irvine looks at a new model company’s premier release
Despite the number of German V-2 rocket kits that have been made (and, ahem, a comprehensive list can be seen in my book Creating Space), 1:24 is a scale that’s not been used before. It is not a standard scale for military or aircraft models, which tend to be 1:32, 1:35, 1:48 or 1:72. However, 1:24 is one of the main automotive scales, so this new V-2 kit could open the door for those interested in building dioramas, with a whole range of interesting additions. 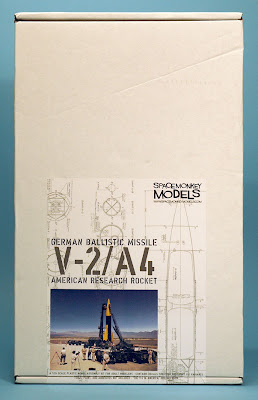 The sturdy box in which your 1:24 scale V2 arrives.
First kit release

This V-2 comes from a new entry in the field, the intriguingly named SpaceMonkey Models, run by James Duffy out of Georgetown, Texas. This is the company’s first kit, although James also runs rocket.aero (pronounced ‘rocket dot aero’) which specializes in DVDs of aircraft and missiles. 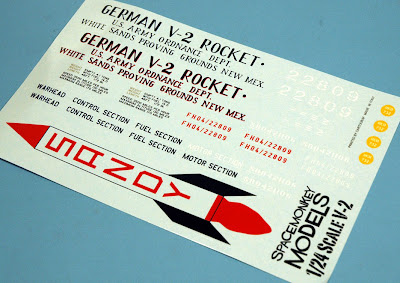 At 584 mm (23 in) tall, the 1:24 scale V-2 is pretty large, so SpaceMonkey Models has taken the step of using blow-moulding techniques for the main structure. Blow-moulding - it’s by a method more or less as it says on the tin - is a process that has long been used by flying-model rocketeers, as it results in large, lightweight mouldings, even if they are sometimes not up to the detail standards of true injection moulding. Some static kit companies have used it before - Dragon is one - but I’m pleased to say that the styrene moulding here is very detailed and once finished, you’d be hard pressed to tell it’s been produced by this method. 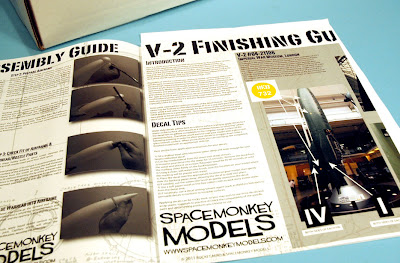 Full-colour booklet includes pictures of V-2s on display around the world. The one on the right-hand page here is currently in the Imperial War Museum, London.
Disposable balls

The oddly-shaped piece in the middle of the parts layout picture at top is the V-2’s blow-moulded main structure. The ‘balls’ either end are disposable, and are removed when you are ready to start. There are separate injection-moulded parts for the nose cone, rocket nozzle, and fins. 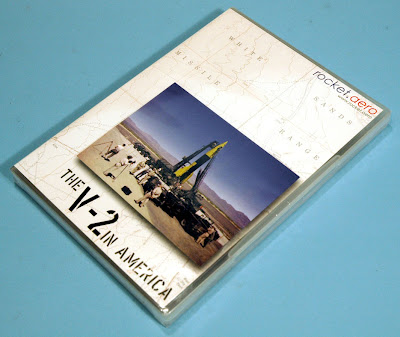 DVD bonus
A bonus with the kit is that the SpaceMonkey DVD is included. It’s multi-region, or Region 0, so will play anywhere in the world, and includes footage of V-2s as flown in the US after World War II, much of which hasn’t been seen before, or not available in a popular format. The DVD and kit together mark a very important chapter in rocket history.
This is just a preliminary open-the-box review - more when we get the thing actually built!
Thanks to James Duffy for the review kit.
See more at SpaceMonkey Models here.
Visit rocket.aero here.
Assorted rocketry here.
Mat Irvine’s Creating Space here.
Finished SpaceMonkey V-2 here.
Email ThisBlogThis!Share to TwitterShare to FacebookShare to Pinterest
Labels: Creating Space, James Duffy, rocket.aero, SpaceMonkey, V-2
Newer Post Older Post Home