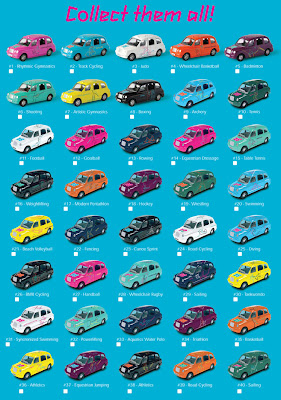 SMN report
Here’s one for the keen London Olympics 2012  collectibles lover, a 40-strong range of London taxis, each one decorated with graphics representing a different sport. The taxis are small, about 1:64 scale, and are very basic in appearance and detail - you get wheels, windows, a simple interior, but that’s about it apart from painted lights, grille, and an attractive mini-box.
Olympics 2012
The appeal is in the Olympic connection, which is fair enough, but it does rather raise the question:  why is it that ‘popular attraction’ collectible models are, almost without exception, produced down to a price, rather than being a life-affirming ‘best they can be’? Pocket money purchases and casual buying are probably the answers to the question, but how nice it would be if a few more items of tourist tat were tourist treasures instead. 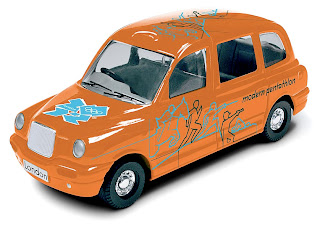 Hey ho, rant over, a collection of these would indeed be quite good fun, or one or two in the sport of your choice could be good to decorate a shelf after the event. Even so, we can’t help feeling that a really decent 1:50 scale London taxi would be of immense appeal, and would look good next to Corgi’s well respected diecasts to this scale, such as the truck and traction engine ranges. And of course, a 1:43 version from Corgi, packed with the levels of gem-like detail that’s the norm with, say, specialist F1 racing car models, would be a must-have production. 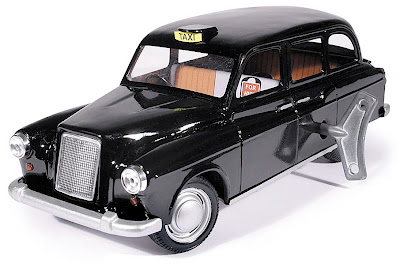 Tinplate Mettoy taxi
There is another option from Corgi though - how about a much bigger 1:24 tinplate FX4 black cab? For that’s what Corgi’s Mettoy brand has to offer, albeit in a limited edition of just 1510 examples. Like the tinplate double-decker bus to the same scale, the 193 mm (7.6 in) long  FX4 is nicely produced and comes with a big key to wind the included clockwork motor. It also has front-wheel steering, and good interior detail.
The Mettoy story
The Mettoy (‘Metal Toy’) name is an old and respected one that dates back to 1934, when it was established by Philipp Ullmann and Arthur Katz in Northampton, UK. Production concentrated on tinplate models with clockwork mechanisms, but in 1956, Mettoy launched its first range of smaller, detailed diecast models to rival the hugely popular Dinky Toys. Corgi Toys were known as ‘the ones with windows’ and marked the birth of this familiar brand.
More to come?
Today the situation is reversed between the two brands - Corgi is now the major name, and is busily creating the next generation of Mettoy models, though still made from tinplate and powered by clockwork motors. In fact, there’s a strong whiff of nostalgia here, aiming to recapture the days of those early toy designs. Let’s hope that Mettoy brings out many future variations on the FX4. The cab was produced from 1958-97, so there are thousands of colour schemes to choose, with owners and cab companies based all over the world. 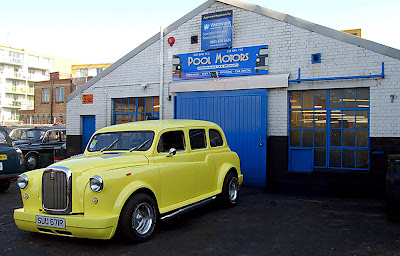 Custom cab with a serious engine
Proving that custom cars can be based on the most unlikely vehicle, the London-based black taxi specialist Pool Motors has a quite excellent promo vehicle in the form of this lemon-yellow lowered and chopped FX4, powered by an 8.2 litre General Motors V8 engine. Very nice too, especially those tasty wheels and fat tyres - and a really unusual subject for a kit-bash!
Visit Corgi taxis here.
See more taxis here.
Visit Pool Motors here.
Email ThisBlogThis!Share to TwitterShare to FacebookShare to Pinterest
Labels: 2012, Corgi, diecast, London Olympics, Pool Motors, taxi
Newer Post Older Post Home