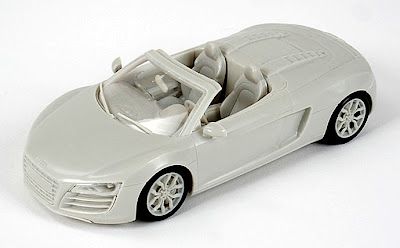 SMN report
These pictures show a Revell’s-eye-view of its Audi R8 Spyder, a kit that’s due out this summer. To 1:24 scale, the model measures some 184 mm (7.25 in) long, with a component-count of 110. To judge from the test shots, the detail looks up to scratch, with a particularly well sorted engine under that lift-up cover. The cockpit too shows care and attention, with a steering wheel that has the correct flattened underside, and general layout that follows the real thing reasonably accurately.

For super-detail fans, we’ve included some official Audi promo pix, so you can add the extras that could turn a decent kit into a show-stopper. We’re not sure if it’ll be possible to reproduce that beautiful coloured stitching on the leather though - now there’s a challenge!

It’s good to see that a hardtop will be available - for display purposes this could be placed separately next to the car. Generally, it will be worth taking care with texture and finish on this kit - the real thing is something of a symphony of these, with brushed aluminium, gleaming chrome, metallic paint, satin fascia plastics, and soft leather upholstery all playing a part. Reproduce that lot well, and you’ll have people polishing their glasses to look closer. 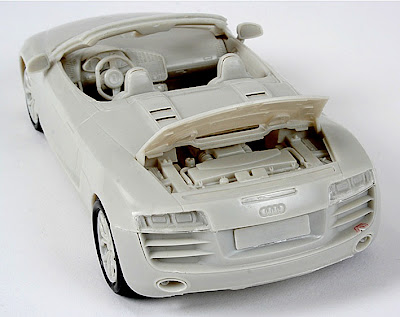 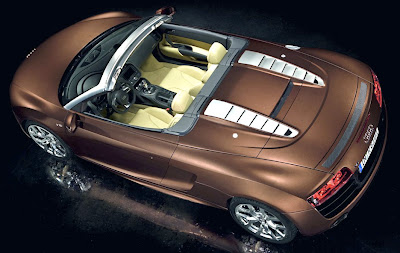 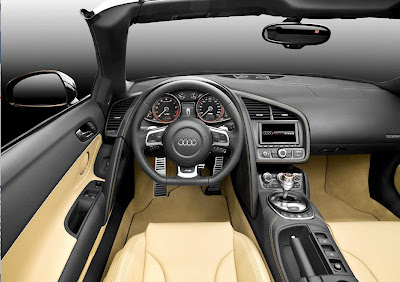 R8 Spyder - a performance-plus car
As for the real thing, the open-top R8 Spyder follows in the footsteps of the earlier, 2006 R8 coupe, though it eschews the use of the rather stylish ‘blade’ side panels, instead having fairly conventional cooling air intakes for the rear-mounted engine. No matter - the R8 Spyder is sex on a stick, and this writer would have one in a heartbeat, given a planet-sized wallet. As for performance, give one of these babies a firm push on the throttle and that 525 bhp engine will have you blasting up to a claimed 313 km/h (194 mph). Yes please! 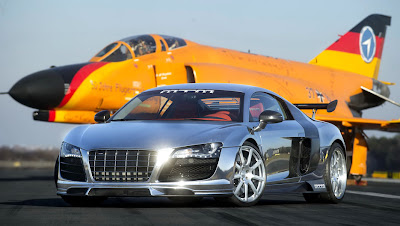 R8 Coupe and F-4 Phantom II
Here we have the Audi R8 Coupe, posed here in front of the bright orange Luftwaffe ‘50 Years of Flight Testing’ (‘50 Jahre Flugerprobung’) F-4 Phantom II, modelled by Revell in its 1:100 scale Easy-Kit range. It’s a neat little model, with a wingspan of 118 mm (4.6 in), and a full range of stores - four Sidewinders, four Sparrows, plus fuel tanks under the wings and fuselage. The crew are shrunken dwarfs, wearing helmets that just about peek above the canopy sill, but they do exist, and from a distance look OK.
More importantly the one-off ’50 Years’ finish is nicely applied, though lacking much of the smaller lettering applied to the original. But that’s acceptable at this scale, which is more than we can say for the excuse of an undercarriage, which is fit only for the bin. The Phantom is best displayed in flight mode, though you will have to supply your own stand if you want one.

SMN score
Too soon for a final tally on the R8 Spyder, but on potential alone, we’ll give it 8.5/10. As for the F-4 Phantom II, we’ll give the airframe and pre-painted finish an Easy-Kit score of 8/10, but the landing gear gets 'nil points'. No, on second thoughts, that's a minus-score as it doesn’t  relate to anything seen on any aircraft, ever.
See the Revell Audi R8 Coupe kit here.
See other car kits here.
Test shot pictures courtesy Revell.
Phantom II model SMN Studio.
Email ThisBlogThis!Share to TwitterShare to FacebookShare to Pinterest
Labels: Audi, F-4, Luftwaffe, Phantom II, R8, Revell
Newer Post Older Post Home