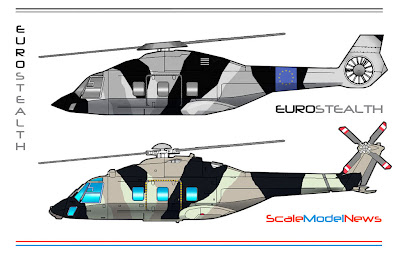 SMN report
After news of the secret US stealth chopper that crashed during the bin Laden raid, and the previous NATO bombing of Colonel Gaddafi’s villa in Tripoli, Libya, it struck us that maybe - just maybe - there might be a European-issue stealth helo flying quiet and unseen through the night skies. We had a close look at likely candidates and reckon that the NH90 military helicopter fits the bill pretty well. It has a composite fuselage, a fairly stealthy faceted fuselage, retractable landing gear, and enough room to carry a fully-equipped SAS snatch team. 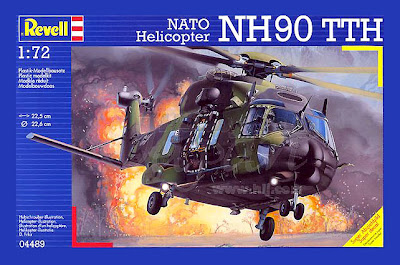 EuroStealth helicopter to capture Gaddafi?
The NH Industries machine has become a major success story, and a limited-edition stealth version would make financial sense, particularly if a small number of them were shared across the 11 Euroland countries that fly various versions of the NH90. The drawings show how a fairly minor airframe clean-up could give the NH90 the ‘quietness’ it needs to tackle a ‘Get Gaddafi’ raid - though we’d like to think that the object of the exercise would be bring him back alive for trial at the International Court. 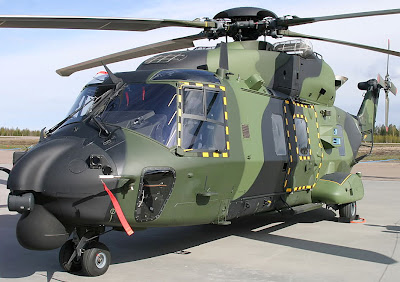 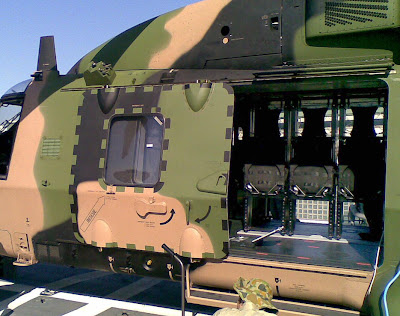 Sliding door with fuselage step underneath. Note the row of seats inside.
Fenestron replaces tail rotor

The biggest change we envisage for the machine is to replace the conventional tail rotor with a Gazelle-style fenestron, which would be cleaner aerodynamically, and likely to be quieter too. Engine exhausts would be louvred and baffled to cut down turbine roar and to reduce the infra-red heat signature. The main rotor head assembly is protected by a radar-proof disc, and the airframe has none of the humps and bumps of the standard-issue machine. 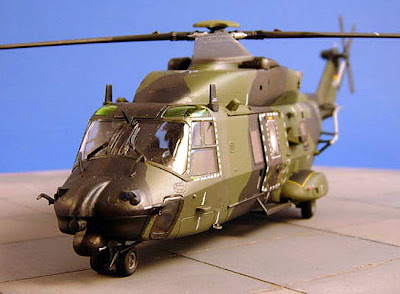 To model the EuroStealth, the 1:72 scale Revell kit is the best place to start, but avoid the upcoming NFH (NATO Frigate Helicopter) release. The NFH features a ventral radome, which is the last thing a EuroStealth helo needs! You want the Army TTH (Tactical Transport helicopter) version, which is freely available, though we’re not sure if is actually in production at the moment. No matter, there are plenty around. 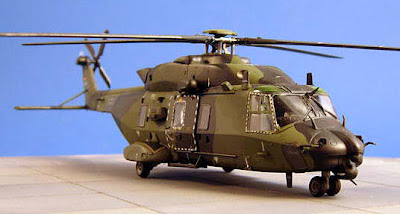 The Revell NH90 TTH kit goes together well, and has a fair amount of internal detail too, including a full set of inward-facing combat seats, and nicely textured cabin floor. Upfront, there is plenty of detail, including flight controls, and a neatly printed instrument panel decal. The 1:72 scale Revell NH90 is a fair size when assembled, at some 225 mm (8.9 in) long, with a main rotor diameter of 226 mm (8.9 in).
EuroStealth concept by David Jefferis/SMN Studio, base art for standard NH90 courtesy ‘bageera005’ here.
1:72 scale Revell NH90 here.
Email ThisBlogThis!Share to TwitterShare to FacebookShare to Pinterest
Labels: Al Qaeda, EuroStealth, Gaddafi, Libya, NH90, Osama Bin Laden, Stealth, Tripoli
Newer Post Older Post Home