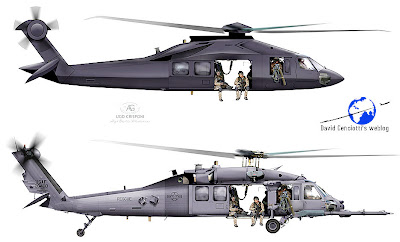 SMN report
Those news pictures of the crashed US stealth helicopter have certainly got the aerospace community hotted up with curiosity - and us model fans too. And now the respected Italian aviation writer David Cenciotti has linked up with skilled graphic artist Ugo Crisponi to show what a full-on stealth MH-60K could look like. The visualization, compared above with a standard machine, looks highly convincing and shows a sleek machine that's loaded with stealth features.

German forces NH-90.
Stealth design details
Ugo Crisponi’s visual shows off many of the expected aspects of such a stealth machine, including a faceted fuselage cross-section, similar to that of the European NH-90 multi-role helicopter shown above. There are anti-radar discs over both rotor-heads, a shark-like nose that’s free of sensor protruberances, and - importantly - retractable landing gear. All these ‘smoothing’ design features go toward making such a machine far more likely to survive in a hostile combat environment. However - when (and if) the real thing is revealed, it may well look very different to this conceptualization. Even so, there's plenty of food for thought here that could lead to a realistic kit conversion. In fact, an option for kit-bashers could be a Euro-stealth helo, based on the 1:72 scale Revell NH-90. Now there's a thought... 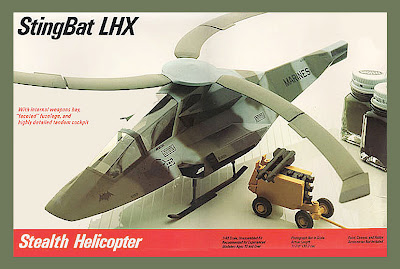 Boxtop for the StingBat.
Futuristic StingBat
Where models are concerned, kit companies have done their fair share of stealth guesstimates over the years, the most relevant of which is the 1:48 scale Italeri/Testors StingBat LHX combat helicopter, manufactured for a short while in 1989. Luckily, we have those mega-enthusiasts over at Fantastic Plastic to thank for keeping pictures and details of that old (but futuristic) StingBat on view. 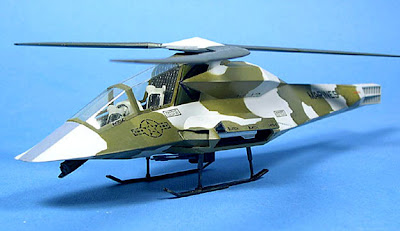 The assembled 1:48 scale StingBat, as featured at Fantastic Plastic.
Swept rotor blades
For a largely ‘blue-sky’ design, the StingBat was a really advanced concept, complete with faceted fuselage, composite construction, rotor head disc, internal weapon bays and dramatically curving, swept rotor blades. As was a technical theme of the time, StingBat had no tail rotor (NOTAR), instead the designers intended that engine exhaust gases would be blown through moveable louvres to provide the adjustable sideways thrust needed for adequate torque control during slow speed and hovering flight.

Overall, the StingBat is a pretty convincing model that was based on requirements demanded by the US Army LHX (Light Helicopter Experimental) program, started in 1983. Despite the promise of such a quantum jump in helicopter design, technical and costs considerations eventually killed the project.