CAN’T MAKE WONDERFEST? SAVE MONEY INSTEAD! SMN report
The folks at Fantastic Plastic are visiting the WonderFest international hobby event this weekend, and have a sale on to mark their escape from the office. Up to 30 percent savings are in place, and if you like to model interesting, unusual, or simply bizarre aerospace and sci-fi subjects, then FP is the place to visit. 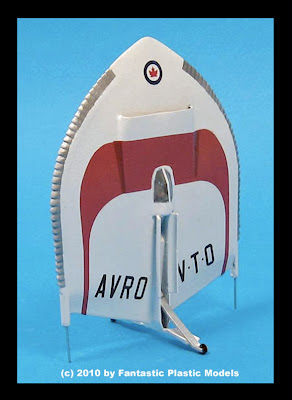 Wide range of oddities
Fantastic Plastic does the sort of subjects that mainstream kit manufacturers won’t go near, as there simply isn’t the mass-market for - let’s say - a weird ‘maybe’ project from 50 years ago that there is in another Spitfire or Mustang. All of which makes FP’s range of kits that much more appealing to the SMN crew. Mind you, many of FP’s kits are short-run items that come and go like the tides, so if you want something, it’s best to get in quick.
Sale lineup this week
Of the items on the marked-down list, the Avro Project Y really takes our fancy. It was produced in Canada at a time when ‘flying saucer’ projects seemed to be at the cutting edge of designer dreams, and the ‘Y’ certainly looked the part. With a vertical-takeoff and landing (VTOL) capability, a squadron of Y-interceptors could rise up to attack and destroy approaching Soviet bombers. The importance of VTOL in Cold War days was that military planners expected virtually all conventional airfields to be destroyed as a precursor to an all-out Soviet onslaught. 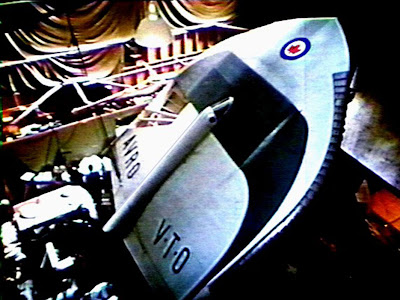 Still-frame shows the Project Y in mockup form.
High-speed Avro aircraft
The Avro Canada Project Y (also nicknamed the ‘Ace’ or ‘Spade’) was a radically shaped single-seater, powered by an RFGT (RadIal Flow Gas Turbine) engine, a leading-edge concept that promised more thrust than a conventional jet. Early designs indicated a possible top speed of Mach 2.5-plus, and on this promise a mockup was built, as shown in the pic, a still-frame taken from an Avro publicity movie of the time. However, exciting as the project may have been, the Y-fighter was cancelled soon after the mockup was built, probably because of cost difficulties. 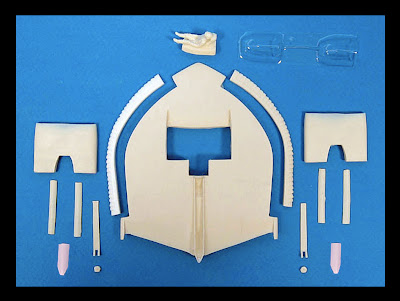 Components of the Avro Project Y.
What’s in the box?
Well first of all, it’s great that there’s a kit available of this rare-bird project, but as ever with resin kits like this, you need to take more care than with a mainstream kit. However, with just 17 components, the 1:72 scale Y-interceptor should not be too difficult a project for anyone with basic skills, and it will certainly be a talking point in any collection. When assembled, the Y measures just 102 mm (4 in), so it may be worth adding a section of tarmac to give it some presence on the display shelf.
Difficult landings envisaged
There is a pilot figure included, and when in position it shows how difficult landing would have been, had the Y ever left the ground. Return to base was a common issue with so many VTOL projects of the time - mirrors, rotating seats, periscopes were all tried as aids to help tail-first landings, with varying levels of success. It remains the case that the only truly successful V/STOL combat aircraft has been the conventional-attitude British Harrier.
The Fantastic Plastic sale ends on May 22. See what’s on offer here.
Other Cold War warriors here and here.
Email ThisBlogThis!Share to TwitterShare to FacebookShare to Pinterest
Labels: Avro Project Y, Cold War, Fantastic Plastic, fantasy, Harrier, sci-fi, WonderFest
Newer Post Older Post Home