SMN report
It’s something of a helicopter time at the moment - the stealth machines used in the bin Laden raid, a possible European-issue NH90 stealth-design, and now the news that British Army WAH-64D Apache AH1s have been ordered into North Africa, operating from the amphibious assault ship HMS Ocean, in joint operations with French Eurocopter Tigers.

Which Apache model to make?
There are plenty of Apache models out there, including the diminutive 1:144 scale Revell kit, but for a complex machine like this with so much detail in the cockpits, weapons, and rotor assemblies, smaller models are not really the most satisfying way to go, and even 1:72 scale doesn’t appeal to us. No, in our view 1:48 is the best all-round scale for doing justice to this state-of-the-art attack helicopter. And for the easily-recognizeable ‘D’ version, which mounts a Longbow radar atop the rotor mast, both Italeri and Hasegawa kits make good starting points. 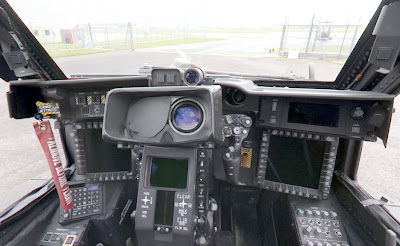 Front cockpit.
Discreet markings
As for markings, the British Army WAH-64D won’t give the decal-makers fat wallets - the only emblems visible from the side are a small black ARMY sign, a discreet red-and-blue UK armed forces roundel, and a serial number halfway up the tail-rotor fin. Small red triangles are next to the cockpits, and yellow WARNING labels are printed by the missile launchers, but really, that’s about it. 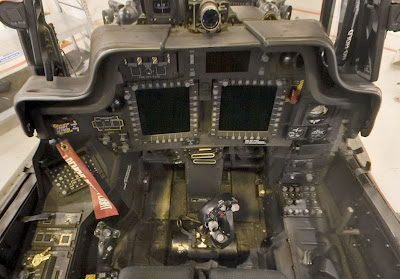 Note that the British Army version differs in detail from the standard-issue AH-64D. AgustaWestland built most of them under licence from Boeing, with changes that include folding rotor blades, de-icing equipment, Roll-Royce engines, and various equipment and sensor differences. You’ll have to look hard to detect the changes though, and the RAF Fairford picture, taken by by ‘Bob the Pirate’ should help. The cockpit shots are official British Army issue.
Display decision
So, for adding visual interest to the AH-64D’s surfaces, careful air- and dry-brushing to highlight all the rivet and panel sections are good options, though the results could easily be overdone, as the flat-finish of the Army’s Apache is designed to be just that - flat and dull. A set of blue drill-issue Hellfires could lift things, but this is definitely a case where a decision to make a diorama display, adding figures of crew, technicians, and maintenance equipment could be a transforming choice.
Interesting YouTube video of a US Army AH-64D kit-build.
Another feature

If the finished model warrants it, how about adding a neat user-feature in the form of a magnifying glass? There’s a model rail museum not far from SMN Towers, where these are built into the side glass of several display cases, and this added ingredient provides a good measure of bonus-interest for visitors young and old.
Various AH-64 helos to choose here.
Cockpit pix courtesy UK Ministry of Defence.