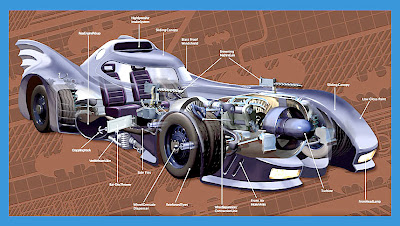 SMN report
Here’s an update on the continuing Batman Automobilia series, now into its fifth 1:43 scale vehicle, the Gangbusters-style retromobile from the 1940s, and a very neat model it is too. All the Batmobiles are presented in the same stackable clear plastic oval boxes, which make them look very presentable indeed, though as this writer is in pre-housemove clearance mode, storage issues put any thoughts of a collection into cold storage! The accompanying magazines are pretty good too - the picture above, from the launch issue, shows the attention to detail that has gone into this production.

The Eaglemoss website reveals details of Batmobiles four and five.
Predictably enough, the first three Batmobiles were the hot items, but for a keen Bat-fan, this is the opportunity for something like completeness in one aspect of your Batman collection. 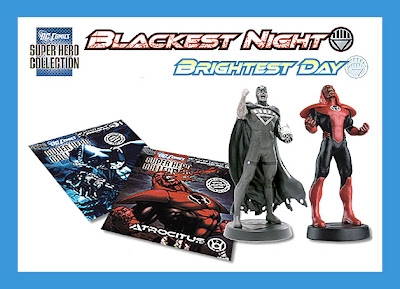 Green Lantern figures
For superhero lovers, Batman is of course just a starter, and Eaglemoss is catering to this market with a range of lead figures, titled ‘Blackest Night Brightest Day’, which splendid name covers a myriad characters from the DC Comics Green Lantern series - and as the upcoming movie is due to hit the silver screen a month from today, BNBD is a well-timed publication. Each issue of BNBD consists of an individually-numbered figure on a display base, presented in a collector box. The figure is backed up by a magazine packed with facts about the individual concerned. If you’re into superheroes, this looks an interesting collection. 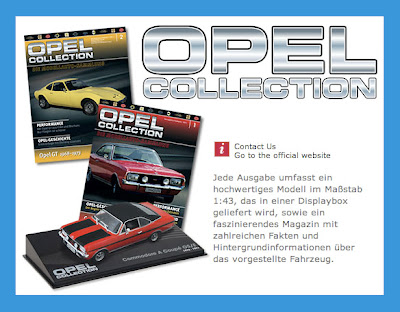 1:43 scale Opel cars
Eaglemoss has international connections, and this shows in other offerings, which include a 1:43 diecast Opel automobile range, aimed at buyers in Germany, Opel's home country. As you can see from the pix, the cars look well done, and if you’re into Euromobiles there’s a good collection to build up here.

Four Opels, from an expanding range.
Opel and other names
Opel is one of the earliest car companies, having been manufacturing vehicles since 1899, though it has been a wholly-owned subsidiary of the US General Motors since 1929. In Europe, Opel output is shared with another GM subsidiary, Vauxhall in the UK. In most of Europe you’ll get an Opel lightning badge on your car; in the UK and some other places it’ll be a Vauxhall griffin. In the US and Australian markets, Buick, Cadillac, and Holden are names that enter the equation. Whatever, Eaglemoss can trawl through more than a century of auto-history for subjects to render in 1:43 scale, which is a mouthwatering prospect. 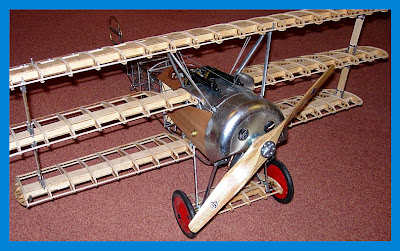 Mixed-media 1:8 scale Fokker Dr1 Triplane from Hachette.
Hachette’s huge Fokker Triplane
Eaglemoss is not the only partwork publisher out there, and a strong competitior is Hachette of France, which has had quite a few impressive offerings, including a Tiger tank, Lancaster bomber, even a world of tractors range. Hachette’s massive 1:8 scale Fokker Dr1 Triplane is a particularly good example of what can be achieved, and a dedicated website had this to say of the famed Red Baron's aircraft: “The model is made from laser cut ply for the wings, cast metal alloy parts for the engine, brass and cast alloy in the fuselage, a fabulous laminated wooden prop, wood veneers in the cockpit, and various other materials. The detail is very good, and the model seems to be very accurate, down to the correct internal construction and all the various fittings. It's probably the most detailed aircraft kit I've seen.”
Sounds good to us, and a reissue of this one would be tempting.
The Eaglemoss website has heaps of information, so it’s definitely worth a look, and if you feel like subscribing (usually necessary once a partwork gets past the first few issues) you can do so on the site, here.
View Batmobile Automobilia here.
Hachette partworks here.
Info on the Fokker Dr1 Triplane here.
Email ThisBlogThis!Share to TwitterShare to FacebookShare to Pinterest
Labels: Batmobile, diecast, Eaglemoss, figure, Fokker Triplane, Green Lantern, Opel, Red Baron
Newer Post Older Post Home