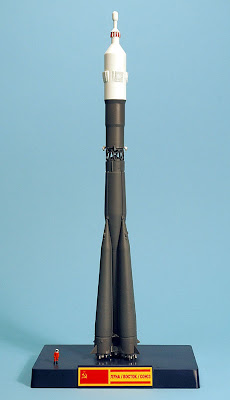 To finish this three-part appraisal of the reissued Airfix Vostok launcher, it’s worth pointing out that you don’t just get the version that launched the Vostok spacecraft. Because 2011 is the 50th year of humans in space, the kit has been issued with cosmonaut Yuri Gagarin’s orbital version to the forefront, but other options have included Soyuz and Sputnik - or have they?
The first satellite
First, a bit of background. Sputnik 1 was the first artificial satellite to be launched, on October 4, 1957, and so began the ‘Space Age’. The launcher as a whole, usually called the A-type in the west, or R-7 or Semyorka (‘Seven’) by the Soviets, was based on the SS-6 Sapwood ICBM. 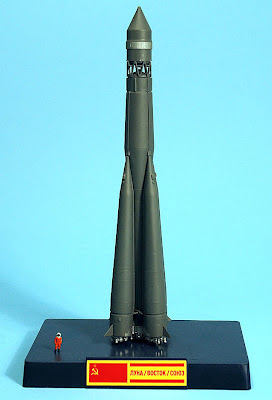 Airfix Vostok, Luna version.
After World War II
The SS-6 resulted from Cold War enmities, when the USSR (having been our ally during World War II) retreated behind the so-called ‘Iron Curtain’. However, this was not before it shared in the spoils of victory over Germany, sharing with the US much of what had been the V-2 rocket programme headed by Wernher von Braun. Large stockpiles of V-2s and equipment were taken, though von Braun went to the US, later to become architect of the Apollo program.
Soviet scientists had been working on rocketry for decades, and continued to do so, but largely in secret. But whatever their nationality, any rocket scientist or engineer knew that orbiting an artificial satellite was not a case of if it could be done, but when. 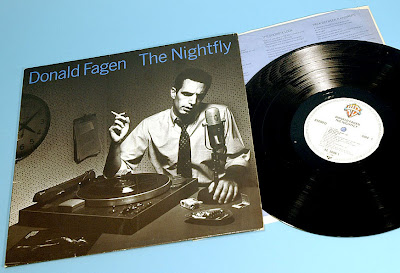 Donald Fagen’s The Nightfly, featuring the song IGY. This is a vinyl LP, a well-established format in 1957, having been introduced as early as 1948.
International Geophysical Year
The 1950s were a busy time for aerospace industries around the world, peaking in mid-1957 with the start of the International Geophysical Year (IGY), which involved almost all countries. This was time of great expectation for scientific research, including orbiting spacecraft, and was summed up in Donald Fagen’s classic The Nighfly album track, IGY: What a Beautiful World, in which he imagined: “Undersea by rail. Ninety minutes from New York to Paris”, and “Get your ticket to that wheel in space. While there's time”.
OK the last two haven’t happened even now, but 1957 did see the shock Soviet launch of the first artificial satellite. Perhaps Sputnik 1 shouldn’t have been a great surprise, as using military missiles as launch vehicles was already an established idea - instead of a warhead, you replaced it with a satellite, precisely the recipe for Sputnik 1. The Soviets took the SS-6 rocket, consisting of a main core and four tapered strap-on boosters, and placed the Sputnik 1 shroud directly on top. 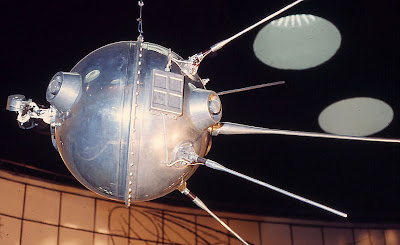 Full size Luna-1 mockup.
No Sputnik from Airfix
And that’s why the Airfix kit doesn’t depict the Sputnik launcher, as the kit supplies the payload shroud atop a second stage, and that wasn’t added until later missions. So, if the kit can’t be built as the Sputnik 1 launcher, can it represent anything else? And fortunately, the answer is: “yes”. It matches the launch configuration of Luna 1 and 2, the first Soviet Moon probes. Consequently the kit now states that it can be built as Vostok, Soyuz, or Luna.
Lunik or Luna?
Incidentally, the first Soviet Moon probes were called ‘Lunik’, but around the ninth probe, the name changed to ‘Luna’, so for simplicity earlier ones have tended to be ‘retro-renamed’ to the Luna name. And let’s not forget the third Airfix option - an early Soyuz launcher. The three-seat Soyuz has been developed a great deal since its flight flight in 1966, and external details have changed considerably, but the kit can be built as a reasonable representation of an early Soyuz launcher. 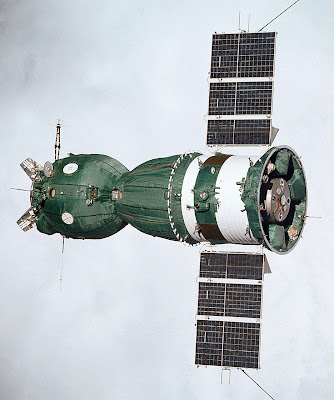 Soyuz 19, used for the Apollo-Soyuz Test Project (ASTP) in 1975.
Into the future
2011 marks another development. With the US Space Shuttle approaching its final flight, Russian craft will then be the only means for US astronauts to make space flights for several years to come - not bad for a rocket design that goes back more than half a century! As the saying goes, which must also exist in Russian: “If it ain’t broke...” 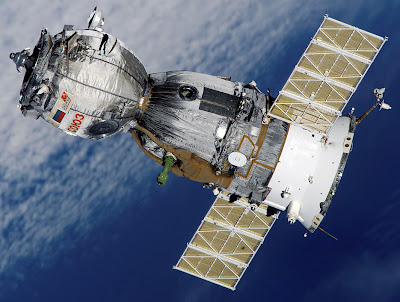