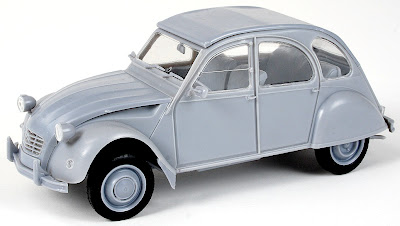 SMN report:
Here’s a set of pictures that should tempt French car fans. The subject is a moulding test shot for Revell’s upcoming Citroen 2CV ‘Deux Chevaux’, a classic set of wheels from the land of garlic and escargots. The new-tool kit is due for release in August 2011, and will have 126 components. Produced to 1:24 scale, the 2CV model will measure 160 mm (6.3 in) long. 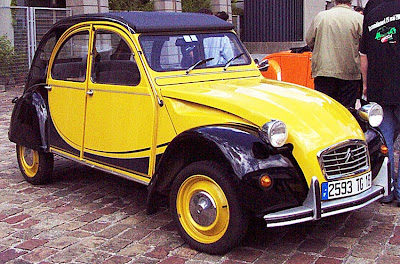 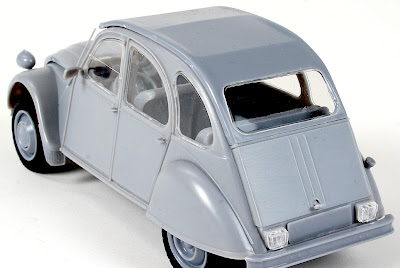 Economy design
The Citroen 2CV dates back to 1948, and represents a post-World War II economy approach to European mass-motoring, with a design brief demanding that the driver should be able to wear a hat, while driving across a ploughed field, carrying a crate of eggs on the passenger seat without breaking a single one. The engine was a tiny, air-cooled twin-cylinder design. 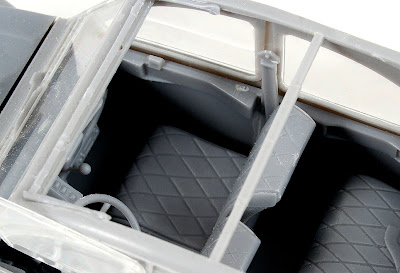 Don’t break the eggs!
The economical car that resulted from that unique brief was easy to maintain and simple to operate, with a soft suspension that made driving on the poor French roads of the time easy and comfortable - and fully capable of keeping those eggs safely in their shells. Revell’s model features a later two-tone machine, the Charleston model that was first released in a rich burgundy-and-black paint scheme, later replaced by the somewhat brighter yellow and black. 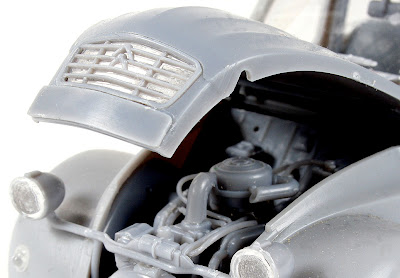 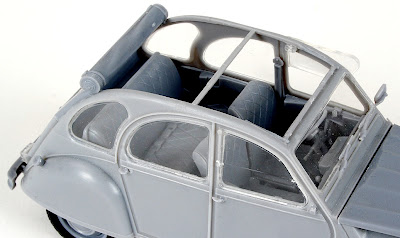 The Revell kit
The specs to the new Revell kit look pretty good, those 126 parts contributing to a fully-detailed engine bay and car interior that includes the unique diamond seat pattern, plus chromed headlamps and wheel hubs. The kit will include a typical 2CV keep-the-price-down feature: front side windows that flipped up, instead of winding down into the doors. Tyres are rubber-look material and the decals will feature number plate registrations for seven European countries. 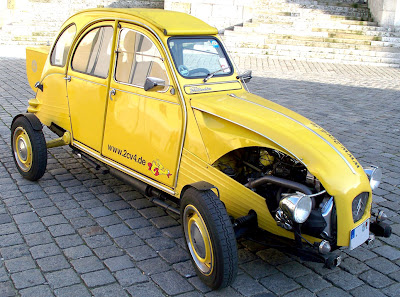 Crazy custom: the Semi Citroen.
2CV model choices
More than 5 million 2CVs had been made by the time production ended in July 1990, so there’s a galaxy of colour schemes out there for you to play with. Or even better, for kit-bashers there’s the bizarre customized ‘Semi Citroen 2CV Speciale’ two-seater, made by sawing a car into thirds lengthwise, taking out the middle, then welding the leftovers back together again. Amazingly weird, but deeply cool - IWOOT.
Email ThisBlogThis!Share to TwitterShare to FacebookShare to Pinterest
Labels: Citroen 2CV, Deux Chevaux, Revell
Newer Post Older Post Home