BACK TO THE FUTURE - APOLLO 11 MOON LANDING 42nd ANNIVERSARY TODAY 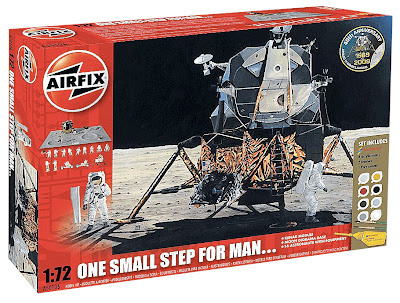 David Jefferis reports:
Forty two years ago today, Neil Armstrong and Buzz Aldrin landed on the Moon, while Michael Collins orbited high above in the Apollo Command Module. The Lunar Module (LM) was a four-legged aluminium-skinned contraption that was a true ‘space’ craft, designed for operation in a vacuum, with none of the smooth streamlined shape necessary for flight in a planetary atmosphere.
Apollo 11 models
There are various models available that commemorate the landing, including the 1:72 scale Airfix diorama kit that includes the LM, a neatly sculpted rectangle of cratered lunar terrain and logistics support in the form of surface instruments, a mixed bunch of astronauts, and Lunar Rovers. The terrain base is a good size, somewhat larger than an A4 sheet, at 348 mm (13.7 in) long x 247 mm (9.7 in). Cement, acrylic paints, and a brush are also included.


Extra astronauts supplied by Airfix
The Apollo 11 landing involved only Armstrong and Aldrin, so the supplied group of astronauts are there for creating a fictional ‘what-if?’ scene, though later missions carried a Lunar Rover, so this Airfix kit can also be used to depict more than the ‘One small step for Man’ flagged on the box-top.
Dreams of space exploration
Interestingly, two of the Airfix astronauts are using one-person flying platforms, which were definitely once part of NASA’s future vision, but which were never actually constructed. Still, we can all dream - I visualized a nuclear-powered Mars ship around this time, when I worked on The Observer Sunday newspaper. I worked on the concept with NASA rocketeers who really thought we could be walking on the Red Planet by 1980! Well, that particular dream vanished when Apollo and the NERVA nuclear rocket programs were cancelled; the rest is history, as is the Space Shuttle. 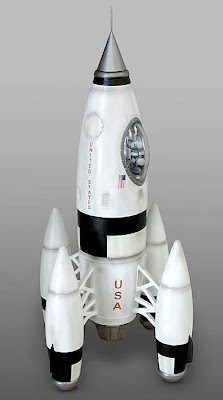 A spacecraft called Apollo 27
The actual Moon missions never went beyond Apollo 17, but for a look at what Apollo 27 might have looked like, click here for a closer look at the fictional spacecraft from Pegasus Hobbies, in California. The tubby streamliner (shown above) seems to have been influenced more by old TV shows and 1950s sci-fi book jackets than a depiction of a possible ‘real-space’ solution, and it’s an exo-endo atmospheric design into the bargain, complete with bubble canopy. Still, I’m not complaining - it’s a fun design and is to 1:72 scale, so would look great standing next to the Airfix Apollo 11 lander. 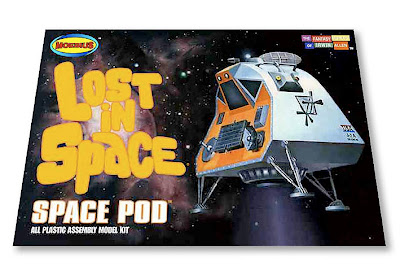 Space Pod from ‘Lost in Space’
There’s a somewhat more realistic pod design that’s been around for a looong time, and that’s the angular Space Pod from the 1960s children’s TV show ‘Lost in Space’. The 1:24 model comes from Moebius Models, and features an opening hatch, so once again diorama possibilities spring to mind - and for this scale and subject you could add alien critters based on model dinosaurs, and tentacled plant-life for a true out-of-this-world display.
Visit Apollo 27 from Pegasus Hobbies here.
Visit the Space Pod at Moebius Models, here.
Various Apollo kits are available at decent discounts here.
Email ThisBlogThis!Share to TwitterShare to FacebookShare to Pinterest
Labels: Apollo 11, Apollo 27, Lost in Space, NASA, NERVA
Newer Post Older Post Home