COMING ON JULY 31 - AUTOMODELLISMO SHOW IN THE UK

SMN report:
Automodellismo is the only model show in the UK that specialises in cars. The show has been running for several years, but 2011 sees a change of venue, to that used by the HaMeX show - Hanslope Village Hall, north of Milton Keynes, Bucks. Automodellismo is being organised by some of the HaMeX organisers, particularly Paul Fitzmaurice of little-cars.com. The countdown to the show is on now, and today it stands at A-minus 22 days... Automodellismo will be held on Sunday 31 July 2011. 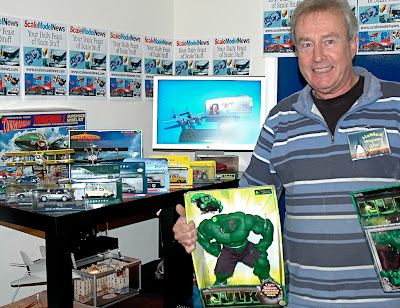 Mr J with green friend at the first HaMeX show.

Tools for modelmakers
Paul will of course be at the show, bringing with him a wide selection of modelling tools and accessories, and also kits for sale. Trade sales at Automodellismo will be augmented by Vince Brown of Models For Sale, the main UK importer for a lot of Japanese auto exotica. Paul’s co-organiser, Mat Irvine, will be at the show too, with a large selection of kits from his vast collection for sale. In Mat’s words, they have to go to new homes, so there will be room to: “...create more space (for more kits...).” 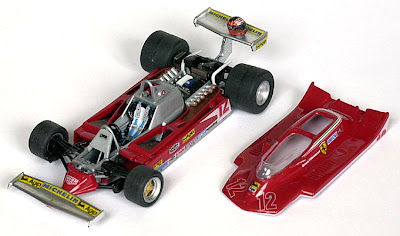 Beautifully detailed F1 kit to 1:43 scale.
New book from Mat Irvine
Mat also has a new hardcopy model car book due for publication soon, Scale Car Modelling. It won’t be printed in time for Automodellismo, but some of the models built especially for the book will be on display for the first time. 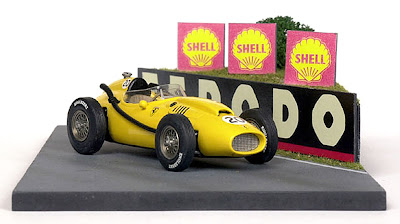 Ferrari white metal kit from Paul Fitzmaurice
Mystery Jaguar car
Extras to tempt visitors to Automodellismo include several full-size cars that will roar in, for a get-as-close-as-you-like appearance in the car park directly outside. Currently, these include a sports-racer, a US muscle car, a classic British sports car, and a Jaguar with a difference. What’s the difference? Come to Automodellismo and find out!
For more details, follow the Automodellismo link here, or go direct here.
You can also check out Paul’s site here and Mat’s site here.
Visit Models For Sale here
Email ThisBlogThis!Share to TwitterShare to FacebookShare to Pinterest
Labels: Automodellismo, HAMEX, Paul Fitzmaurice
Newer Post Older Post Home