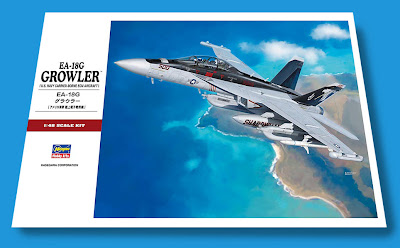 David Jefferis inspects:
Hasegawa’s 1:48 scale Boeing EA-18G Growler electronic warfare aircraft is one of the best-looking aircraft models I’ve seen for a while, and a true candidate for an ultra-careful standard build, straight from the box.
Neat detailing
As you can see from these pictures supplied by Hasegawa, the EA-18G is loaded with neat detail, including all those nicely recessed rivets, candidates for the most delicate weathering job possible, the object just to enhance and bring them out a little. 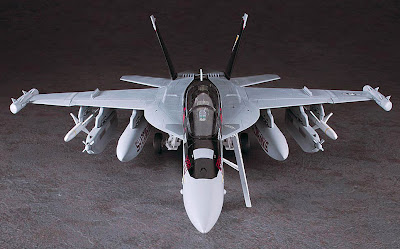 Cockpit detail
A full suite of ordnance is supplied with the kit, and the various pods, tanks and missiles fill up the stores points on the wings and belly, to give the model that oh-so-nice ‘loaded for bear’ look. Cockpit detail for the two-seater EA-18G is well up to Hasegawa standards, and clearly shows the raised rear seat position. Hasegawa supplies a cleanly-moulded ladder, but you’ll have to supply your own figures from one of the 1:48 sets available. 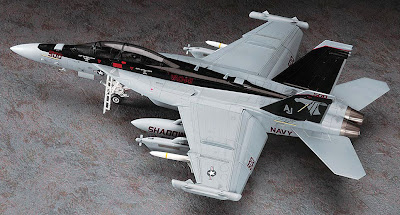 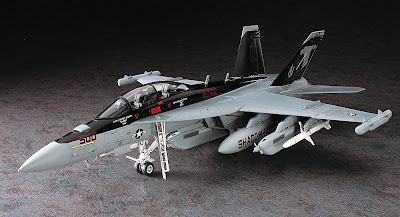 Full decal set
Markings are supplied for two USN squadrons, VAQ-129 Vikings and VAQ-141 Shadowhawks, the latter of which features as the subject of the extremely handsome box-art. Dozens of tiny stencil warnings are supplied, as are decals for the instruments. 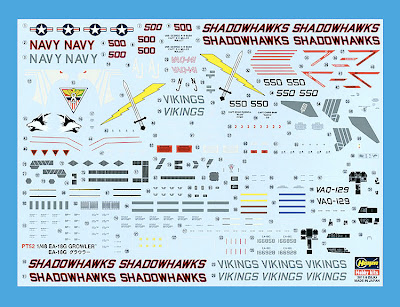 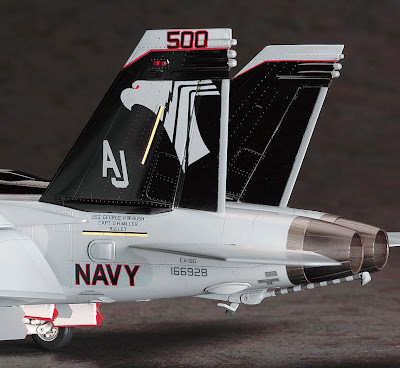 First combat missions
The real thing is flying as the newest electronic attack platform in the US Navy’s airborne arsenal, a specialized version of the two-seat F/A-18F Super Hornet. The Growler’s chief asset is its ability to block enemy radar and electronic systems, and the aircraft was used for just this kind of task during its first combat missions earlier this year, during Operation Odyssey Dawn, enforcing the United Nations no-fly zone over Libya. Like most aircraft these days, its service life is planned for decades rather than years - so it’s likely that Growlers will operate from carriers through to 2035 and beyond. 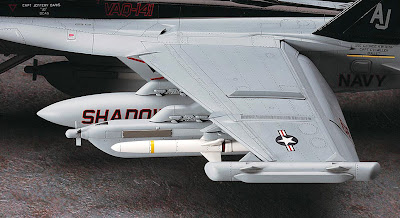 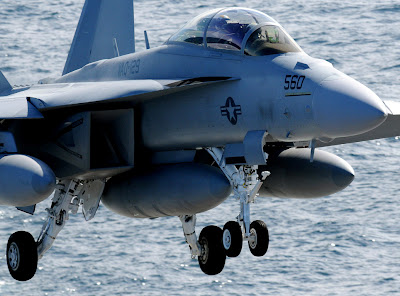 The real thing - a Growler approaches for a deck landing.
If you’re interested in current front-line naval aircraft, the Hasegawa EA-18G Growler is definitely a kit that should be on your list. Released last month, it’s becoming available through dealers and online now. It's worth mentioning that there are other versions of the EA-18G
available, in scales ranging from 1:144 to 1:35 - a good choice if you wish to model this important weapon in the US arsenal.
Pictures courtesy Hasegawa.
Email ThisBlogThis!Share to TwitterShare to FacebookShare to Pinterest
Labels: EA-18G Growler, Odyssey Dawn
Newer Post Older Post Home