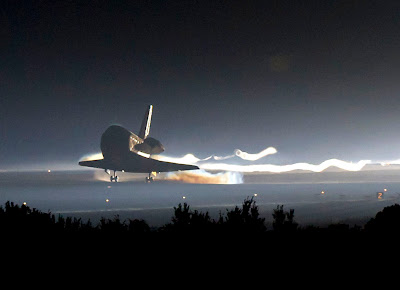 It’s the end of the space trucking era, says David Jefferis:
Forty two years after Armstrong and Aldrin stepped onto the Moon’s surface, it was touchdown for the Space Shuttle Atlantis, and the last-ever mission for the most complex spacecraft system ever built. There’s moaning and groaning by the bucketload, with headlines claiming the end of the US space program, but the reality is that the Shuttle, whatever its merits, represented a retreat from the Moon and true space exploration. For the Shuttle was a space truck to Earth orbit, and no further. Let’s hope that privateer companies like Elon Musk’s SpaceX, and Richard Branson’s Virgin Galactic, fulfill their ambitions and take humans onward and outward, to explore the High Frontier. 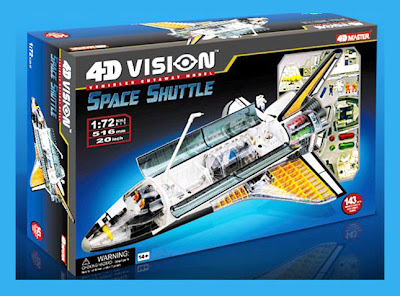 Big model
Back to the workbench, and of the many, many Shuttle models, which is the best one for the nostalgia-buff to assemble? Well, the real answer is that there is no single kit that’s head and shoulders over the rest, but there is one that’s big, detailed, and really rather original, as it is a see-through model. And this is the 1:72 scale Aoshima 4D Vision Space Shuttle. If (like me) you’re limited with your modelling time, then this 520 mm (20 in) long model could be what you need. It’s a fun-to-play-with item too, incorporating operating features that include cargo bay doors, robot arm, and drop-down landing gear. 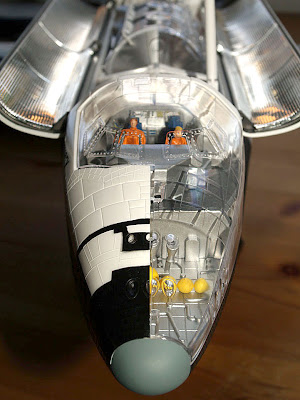 What’s in the box?
Open up the big box and you’ll find trays holding major parts, with a host of smaller pieces separately bagged underneath. The instructions contain a shuttle history, parts layout page, and assembly steps. Putting the Shuttle together is not too difficult, though non-Japanese readers (there's no English translation) need to take things slowly, especially when it comes to putting together the complex pipework inside the tail section. The port wing, with its transparent skin covering bright-orange interior construction, is a thing of beauty, though It’s worth mentioning that despite this being a clip-tight kit, you’ll still need cement for various parts that don’t fit quite snugly enough. 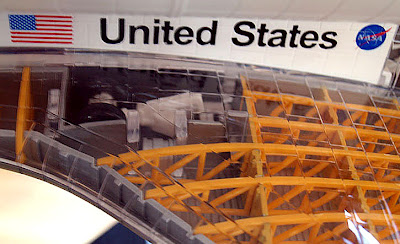 Simplified appearance
So far as accuracy goes, this model only gets 7/10, mainly because so much of it is simplified, and while there’s nothing wrong with that, at this scale, you really do want to see heaps of intricate detail in the finished thing. My suggestion for a first-class result would be to allow plenty of time for brushwork and and some light weathering. That goes for the Shuttlenaut figures too, which are so-so (though one looks pretty neat doing an EVA) and again, would benefit from some TLC with the camelhair brush. 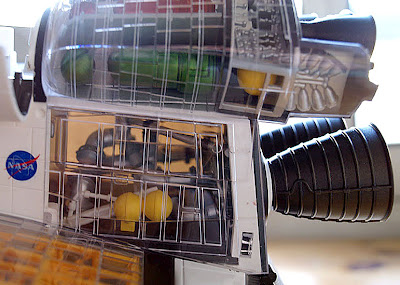 Remember also, that this is just the winged Orbiter. If you want a ‘full-stack' Shuttle, then you’ll have to add an External Tank (ET) and Solid Rocket Boosters (SRBs) from elsewhere - in this case, sourcing an old Monogram kit via ebay might be a solution. 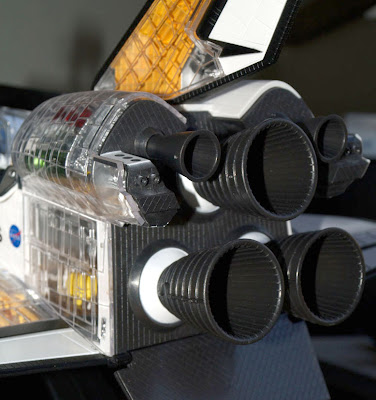 Summation
It’s big, bold, colourful, and the see-through aspect makes it educational into the bargain. So whatever nitpicks there are, the fact is that to the untutored eye, the 4D Vision Space Shuttle looks terrific straight from the box, and will look even better with some careful detailing work. Mounted atop the sturdy stand, it will make a fine memento to mark 30 years of space trucking.
Pictures courtesy the interesting forum site Maquettes Spatiales here.
Email ThisBlogThis!Share to TwitterShare to FacebookShare to Pinterest
Labels: Aoshima, Atlantis, Space Shuttle
Newer Post Older Post Home