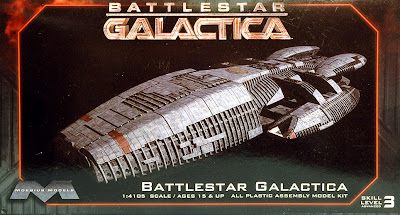 Size is Important, says Mat Irvine:
There is a big problem when you try to make a small model of an immense object, and it is literally one of scale. With most models, it’s an easy subconscious trick to work out scale by comparing bits and pieces on the model to their real-life counterparts.
Reducing a vehicle to, say, 1:25 scale is perfectly acceptable as the doors, seats, steering wheel are familiar objects. A 1:35 scale battle tank has immediately identifiable features, and an 1:72 scale aircraft equally so - even if it is 72 times smaller than the real thing. Even 1:144 scale airliners are OK, as you can still make out doors and imagine yourself sitting behind those tiny windows. But go further, to ocean liner and warship scale - mostly 1:600 down to 1:1200 scale -  at which point commonplace window and door detail starts to disappear.

Box sides have useful extra pictures.
Mighty movie battlewagon
But what happens with craft meant to be several kilometres or even miles long? For that’s the situation with the 1:4105 scale Moebius Models Battlestar Galactica - a reduction at which a typical human would be a speck just 0.04 mm tall! As conceived for the excellent re-imagined 2003 TV series, the huge spacecraft is almost a mile long. Look at any object that length (some bridges are) and you will notice that while shape and structure are fine, familiar-object detail gets lost. It’s the case with this model, so whilst imagination may to fill in many details, it could be possible to put a familiar ‘something’ next to the ship for comparison purposes. The USS Enterprise aircraft carrier for instance would be just 83 mm (3.3 in), long, while the Eiffel Tower would be 79 mm (3.1 in) high. Either of these examples would really underline the Galactica’s huge size, as it is some 330 mm (13 in) long when assembled. 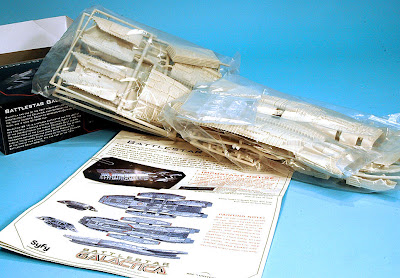 Inside the box are three component-packed polythene bags and excellent instructions.
Evolution of the Galactica story
The Battlestar Galactica storyline has had something of a chequered career since its first airing in 1978. Various incarnations appeared before the present, hugely successful, version was released. In the model world, Monogram made four kits from the original TV series, while this Moebius Models version features the latest Galactica. It’s slightly smaller than the Monogram ‘Mk I’, and does suffer somewhat from that lack of indication of scale and size. Overall however, it is a realistic attempt, with plenty of ribbing and surface detail that just beg to be given the super-detail and weathering treatment. And lest anyone say there is no weather in space, remember that the Battlestar featured here is half a century old, has been in plenty of space battles, and has likely suffered much erosion from dust, gas, and interstellar radiation - plus, of course, plenty of combat damage and repair work. 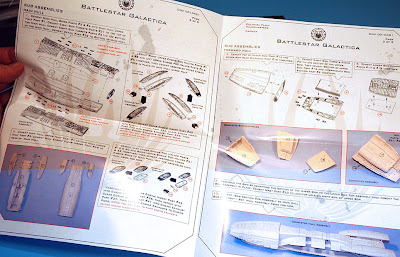 Plans are printed in colour, which is a great help for the final scheme.
What’s in the box?
The box contains three big polythene bags, containing 67 components, including five clear parts. There is also a metal rod that fits into the supplied display stand. Assembly is aided by a comprehensive set of instructions, and colour printing helps a lot, especially when it comes to final finishing. The operational Battlestar Galactica is mostly bare-metal, so finishing the model involves spraying an overall shade of steel, then careful masking for further coats of different shades of gunmetal. And here the plans come into their own, with a five-view technical illustration and colour pix making things clear. Construction is straightforward, though tweezers definitely help with the 24 tiny gun turrets. 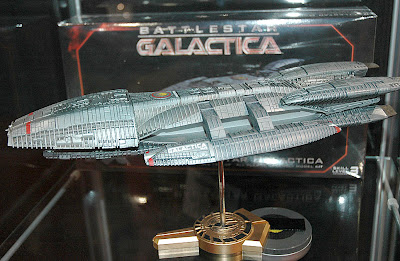 Final model on display - note the excellent pylon stand.
Should you buy the kit?
For sci-fi fans, and of Battlestar Galactica in particular, this is an essential kit for the collection. With attention to detail and all-important paint detailing, it’ll be a rewarding kit to build. And if you add a scale Eiffel Tower - or even a print of it to the right size - then that visual sense of true-to-life size comparison won’t be lost!
Battlestar Galactica fans should keep an ear to the ground for the upcoming Blood and Chrome, a prequel to the present series. The two-hour pilot is currently being shot, for release planned for late 2011 or early 2012.
Review kit supplied courtesy Moebius Models.
Visit Moebius Models here.
Battlestar Galactica kits and collectibles here.
Unofficial fan trailer for Blood and Chrome on TouTube here.
Email ThisBlogThis!Share to TwitterShare to FacebookShare to Pinterest
Labels: Battlestar Galactica, Blood and Chrome, Moebius Models
Newer Post Older Post Home