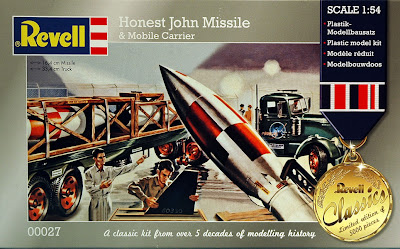 HJ makes an interesting load for the Kenworth truck and Fruehauf trailer.
Multi-colour kit
This ‘new’ HJ kit is moulded in the original colours: green for the Kenworth truck and Fruehauf trailer, white for the missile. The 115-part kit is reissued as it was way back in 1958, though it’s not quite as straightforward as that - the basic kit started in a different form, and the missile is not in what is usually accepted as a ‘standard scale’ for military kits. 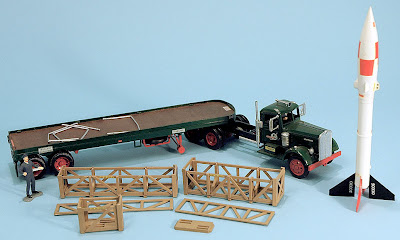 The kit's various elements, laid out for display.
Different scales
Revell produced most of its missile, research rockets, and ‘futuristic’ spacecraft kits during the late 1950s and early 1960s. Missiles and rockets were made mostly in one of two scales - 1:110 for larger rockets, such as the Jupiter C, Douglas Thor, and Convair Atlas, whereas 1:40 was used for smaller items such as battlefield missiles and research rockets, such as the X-17. The Honest John wasn’t technically ‘a missile’, in the ‘guided’ sense, instead being an unguided spin-stabilised artillery rocket. Still, logically it ought to have been 1:40, which was then the AFV scale, rather than the now-standard 1:35.

The original 1958 box from Revell Inc.

The Revell Bekins truck and trailer combo that later served as rocket transporter.
Revell trucks
However, this HJ came as a 1:48 scale kit, as the basic item started off as something completely different. Other Revell missiles and rockets were presented in ‘ready to go’ launch or battlefield condition, but the Honest John came packed in crates - effectively being purely the flatbed load for a Kenworth truck, which already existed in the Revell catalogue. The truck and its Fruehauf trailer had started life two years earlier, in 1956, as a Bekins moving van. Revell made four 1:48 scale vehicle kits around this time - a White gas truck, a Chevrolet stakebed truck, a Ford F-100 pickup, and the Bekins removal van. All have been reissued over the years, but as the Bekins van was soon converted to Honest John duty, the moving van is by far the rarest version. 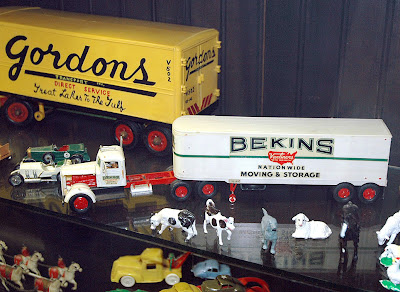 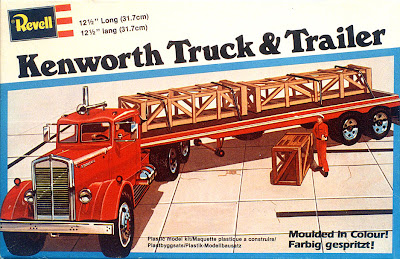 This 1980s kit from Revell-Germany and Revell-GB featured truck, trailer, crates - but no missile.
Removal van to missile carrier
The conversion involved removing the top sections of the Bekins trailer, leaving the flatbed as it was, then adding crates and the Honest John missile, which breaks down into top and bottom sections, plus the four fins, all packing into the crates. Hold-down straps were supplied to keep the crates in place on the flatbed. 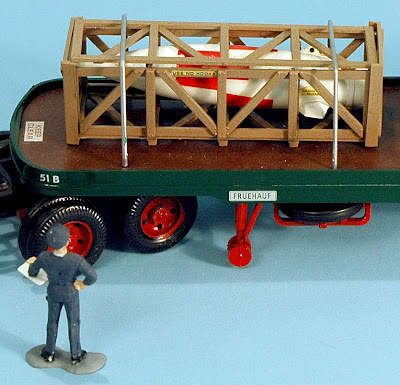 Nicely sculpted figure, and neatly detailed throughout.
Golden oldie
Considering the age of the kit - more than half a century old - it still assembles well. There is little flash (where plastic seeps through gaps worn in the tooling), and the integral wheels and tyres are a vintage feature. Separate vinyl tyres were really new at that time, so it means the tyres here have to be carefully painted in, but the kit still makes for a very satisfactory build.
Scale figures included
The Honest John can be fully assembled, out of the crates, but no launcher is included in the kit. A driver sits in the cab, and a busy-looking standing figure holds a clipboard; both of these were also supplied with the original Bekins issue. The 2011 Classic Kit features a new printing of the original decal sheet, with markings for both the missile and the transporter.

My conversion here shows the Bachem Natter rocket-plane that was taken on US tour after WWII.
The reissue story
Honest John has been reissued before now - in 1996 it was released in Revell-Monogram’s SSP (Selected Subjects Program). Also, the truck, trailer and crates - but no HJ - were issued by both Revell-Germany and Revell-GB in the 1980s. The new box uses the original art, now surrounded by the ‘Classic Kits’ frame, though the stated 1:54 scale is wrong - the kit actually remains in the original 1:48 scale.

HJ could carry standard explosives, a nuclear warhead, or as shown, Sarin nerve gas bomblets.
Limited number available
Besides being an interesting reissue in its own right, the truck and trailer is one of the few such kits in a standard aircraft scale, also the US 0-gauge, so could be useful for a number of diorama possibilities. If you’re interested, get one soon, as the production run is limited to 5000 kits.
Review kit kindly supplied by Revell-Germany.
Email ThisBlogThis!Share to TwitterShare to FacebookShare to Pinterest
Labels: Bekins, Fruehauf, Honest John, Kenworth, missile, Revell, rocket
Newer Post Older Post Home