The headline above echoes alarmist headlines after military experts discovered that China built 80-plus missile-armed 022-class gunboats in roughly the same time that just two US Navy Littoral Combat Ships (LCS) were completed. 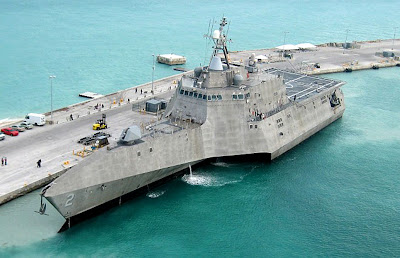 LCS2 USS Independence (above) and a Chinese 022-class boat (below). 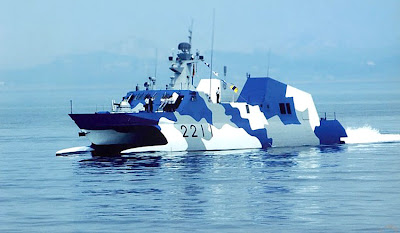 Headline worries aside, the 022 and LCS are very different vessels. For starters, the bigger (and far more expensive) LCS vessels carry helicopters and larger crews. However, the worry is that numbers count in combat, so a dozen high-speed 022 boats, each firing eight anti-ship missiles, could overwhelm a single, bigger target. 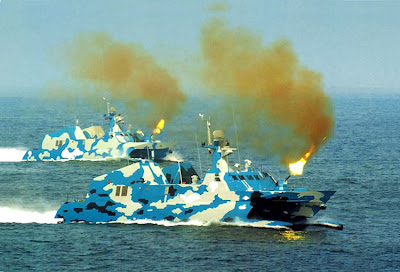 022-class boats (above) practice on a Pacific firing range. The Dragon USS Independence (below) finished as a full-hull build. 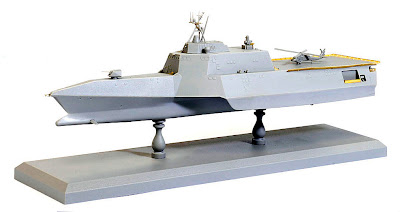 There are two kinds of LCS, the LCS1 monohull Freedom class and the LCS2 trimaran Independence class. It’s the futuristic-looking LCS2 USS Independence we look at here, kitted in two scales - 1:350 and 1:700 - by Dragon, ironically, a Chinese company. The LCS2 we show in the pictures is the smaller of the two, but comments are similar for either kit. Other kits are available too, from makers Bronco and Trumpeter, the latter to 1:350 scale. 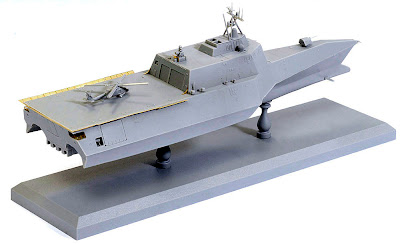 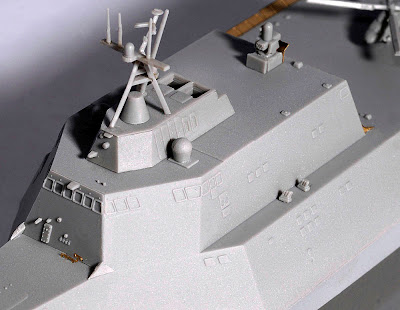 The Dragon model captures the angular look of the original ship very well, and comes with the option of finishing it as a waterline or full-hull model. Helicopters are reasonably accurate miniatures of the Sikorsky SH-60 Seahawk, though at this small scale, fine details and rotor blades are inevitably a little on the large side.

Dragon has also supplied metal-etch parts for much of the fine detail aboard ship, especially useful for the mesh on three sides of the helideck. The hangar doors can be finished open or shut, so a helicopter can be stored inside if you wish. 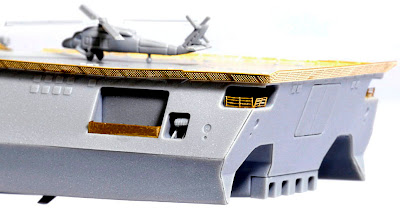 The bare, angular stealth design of the Independence means that many tiny details are simply not there to be modelled. Nevertheless, by the time you’ve added the electronic sensors, main gun, and missile launcher, the end result begins to look highly convincing. 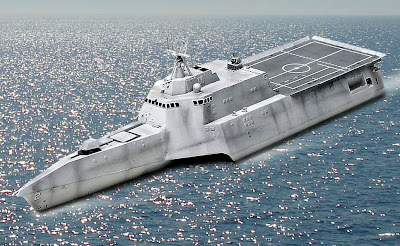 More than many ship models, the stealth design is one that needs the application of weathering, to give something to interest the eye. Look at the pic of our finished model (above) Photoshopped against an ocean background to see the sort of result you could achieve.

Dragon has done a decent job with the kit, but there is more you could add. A close inspection of the Independence at anchor reveals various ports and hatches that Dragon's kit engineers either missed or chosen to leave out. 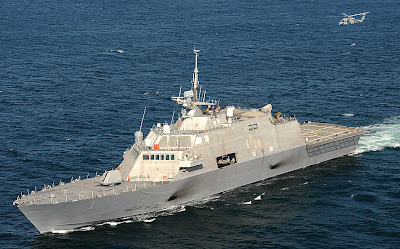 There is also the LCS1 USS Freedom monohull (above) to consider, if you wish to build both these interesting modern navy vessels. We’d like to see an 022-class boat join them as soon as possible, though there is a neat pair of 1:700 gunboats of far more traditional design, link below.