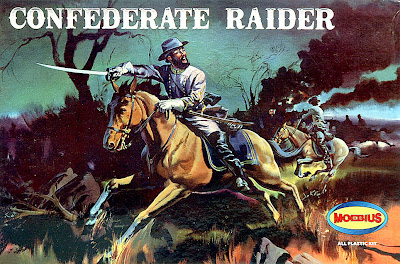 Box-art is a near-identical recreation of the original Aurora painting, by Jo Kotula
Mat Irvine reports:
Besides recreating many science-fiction and fantasy models from Aurora’s earlier years - and adding quite a few new ones in a similar style - Moebius has also reproduced many historical figures. One of the most famous, and now highly collectible, was the Confederate Army Cavalry General, otherwise known as the ‘Confederate Raider’.
Gold Knight background
The kit almost certainly came about because the horse was already in the Aurora catalogue as the mount for the Gold Knight of Nice, first issued in 1957. Consequently the Confederate Raider, issued in 1959, only needed to add the Officer figure. 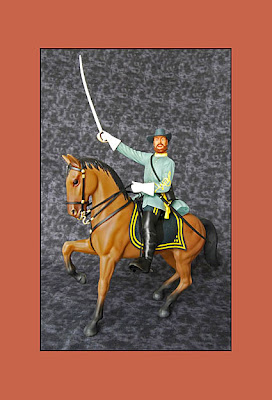 Built-up model by Denis Lange.
Retool kit
The kit here has been retooled by retro-engineering a surviving original kit, as have many Moebius Aurora recreations. It's moulded in two colours - orange-brown for the horse, and light grey for the figure, saddle, and reins. 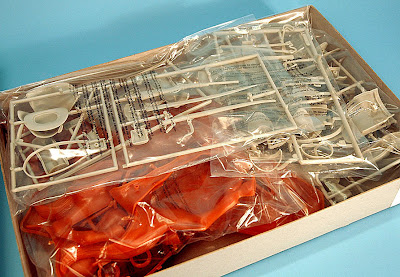 What’s in the box?
The kit has around 60 parts, although the horse itself has a mere dozen - and even that includes four horseshoes. The rest of the components are for the figure and equipment, which total some 25 each.
Scale and height
The kit is reasonably easy to assemble because of its large size. It’s made to 1:8 scale, common to some other Aurora figures. Once assembled, the model stands - to the tip of the drawn sword - around 432 mm (17 in) high. Perhaps oddly, for what was once an Aurora kit, there is no diorama base in this kit: the horse stands on its hoofs alone. 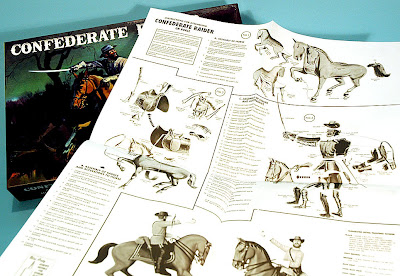 Instructions are a reproduction of the Aurora original.
More horses
The human figure is particular to this kit alone, but the horse was reissued in two more. It became the mount for the Apache Warrior issued in 1960, and was issued ‘by itself’ as Black Fury, first in 1958. Aurora made two other horse kits, with different stances to this one, and made to 1:12, not 1:8 scale. One was the standing Thoroughbred Race Horse, the other the rearing White Stallion. The latter was also used as the mount for kits of Zorro and the Lone Ranger.
Review kit supplied by Moebius Models
Email ThisBlogThis!Share to TwitterShare to FacebookShare to Pinterest
Labels: Aurora, Confederate Raider, Moebius
Newer Post Older Post Home