THE FLIGHT OF IKAROS, A SOLAR-SAIL SPACECRAFT 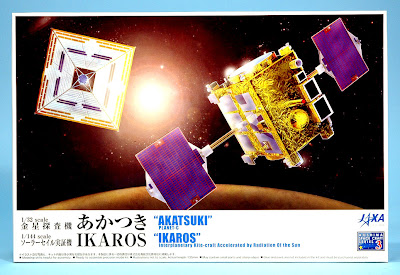 That’s the problem with space model kits says Mat Irvine: like buses, you wait years for one, then three come along, all at once! As I’ve said before, of the three main types of ‘space’ kits - rockets, crewed spacecraft, uncrewed satellites and probes - the last is the poor relation by far. Until recently, styrene-injection satellite kits numbered precisely three, with a few more available in other materials. 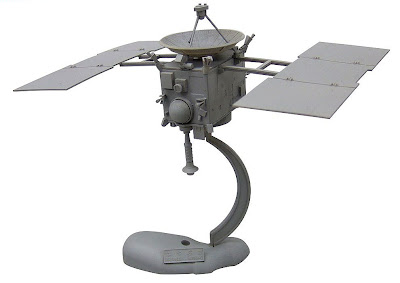 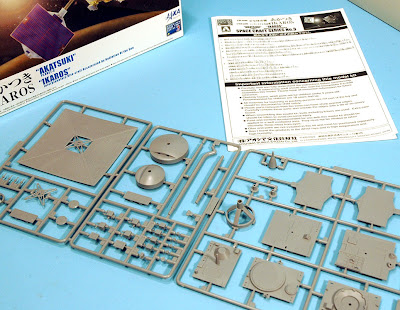 IKAROS parts.
Space Craft series
Now Aoshima has doubled that number to six. The first kit in its new Space Craft Series, Hayabusa, made it four (SMN article on this here) and now the company’s latest offering consists of two kits in one to take the total up to six. Biggest of these two is the 1:32 scale Akatsuki Climate Orbiter probe, presently awaiting a second attempt to achieve orbit around Venus. 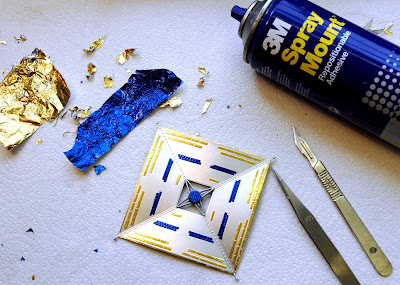 Applying foil - the two colours needed, plus spray glue, scalpel blade and tweezers.
Solar sail
The other kit in the box is a 1:144 scale kit of the IKAROS probe. This was launched with Akatsuki, but is a very different design, being a solar-sail, designed to test the principle of using light pressure from the Sun as propulsion, in much the same way that sailing ships on Earth use the wind. The design worked - IKAROS successfully passed Venus in December 2010, becoming the first interplanetary probe powered by a solar sail. 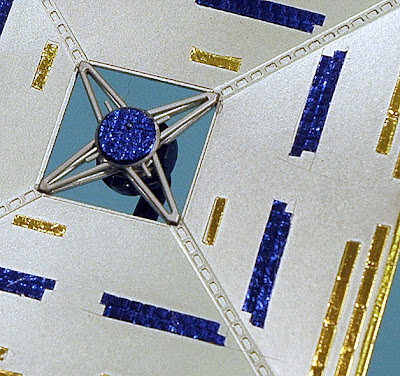 Acronym tongue-twister
The IKAROS - a slightly contrived acronym standing for ‘Interplanetary Kite-craft Accelerated by Radiation Of the Sun’ (phew!) - kit is simplicity itself, with just one main moulding for the extended solar sail, plus seven other detail parts, plus four for the stand. 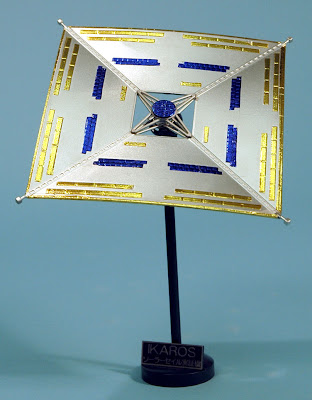 The completed 1:144 scale IKAROS. Foil is more effective than paint as it reflects the light.
Thin sail
The real IKAROS has one main colour, bright silver, for the sail. This is a polyimide material just 0.0075 mm thick, ironically somewhat thinner than the sail of the 1:144 scale kit! There are standard solar panels to generate current for onboard systems, and also gold-foil panels, so it’s an ideal opportunity to reproduce these using coloured foils.
Using foils
Here your ‘gold’ represents LCD panels that, by reflecting light, help with attitude control. You can use foil from chocolate wrappers, sweets or candy - it needs to be traditional foil though, to provide the most realistic effect. If you can’t find any sweeties (Rolo still uses foil) then craft shops often stock suitable alternatives, especially for the blue needed for the other solar panels. Best way to apply the delicate material is to use a light mist of spray glue on the back surface of the foil, then trim after application with a sharp scalpel blade. How the real IKAROS looks in space.
Review kit supplied courtesy Hobby Link Japan.
There are more details on using foils on spacecraft models in my book Scale Spacecraft Modelling here.
The book is published by The Crowood Press, which you can visit here.
More on IKAROS here.