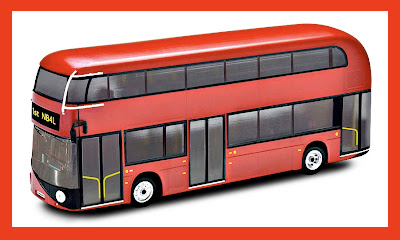 SMN report:
The familiar double-deck London bus is returning to the streets very soon - as planned there’ll be some of them running on the streets in time for the 2012 London Olympics. Sponsored by London Mayor Boris Johnson, the New Bus for London (NB4L) is a designer treat to look at, with swooping glass exposing staircases at front and rear, plus easy access for entry and exit. In our view, easy-access alone makes it a worthwhile project - it’s no fun queuing in the rain while you wait to climb aboard one of the present designs.
Corgi New Bus for London
Now Corgi is getting into the act by planning a 1:76 scale diecast model of the NB4L, for release later this year, under the Original Omnibus Company (OOC) brand name. The pioneering NB4L design draws inspiration from the original Routemaster's instantly recognisable red paint, as well as the traditional hop on, hop off open rear platform, both of which will be reproduced in Corgi's new model, which will measure 146 mm (5.75 in) long.
Several buses coming along
In fact the NB4L will be more than a single model - an entire range is being being planned, for Corgi isn’t stopping with 1:76 scale - the bus will be available in a selection of scales, including a 'fit-the-box’ toy. It will also be made as a diecast key ring - in Corgi’s words: “so everyone from school children to tourists can carry a London souvenir in their pocket”. Well, that’s a fine aspiration Corgi, so good luck from SMN.
A big year for the people of London
2012 is going to be quite a year for Londoners - the Olympics will be running in July and August, preceded by the Queen’s Diamond (75th) Jubilee celebrations, due to take place on June 3. The Corgi NB4L should be in place to mark both occasions - expect some special editions with Olympic and Jubilee branding well to the fore.
All we need now is a Sun Star 1:24 scale diecast NB4L, backed up by a kit for model makers from Revell - a sweet duo indeed!
Plenty of diecast buses at Corgi here.
See more NB4L here.
Email ThisBlogThis!Share to TwitterShare to FacebookShare to Pinterest
Labels: Boris Johnson, Corgi, diecast, London bus, NB4L
Newer Post Older Post Home