David Jefferis looks at a new marine kit:
Revell plan the release of this 1:400 scale kit in November, and it looks an interesting and colourful choice for marine enthusiasts. The scale means you’ll end up with a decent size model - as planned the liner will be 629 mm (24.8 in) long, and the height from keel to mast top will measure 120 mm (4.7 in). It will be a fairly lengthy build, with some 300 components in the box - just the thing for those long winter nights ahead. 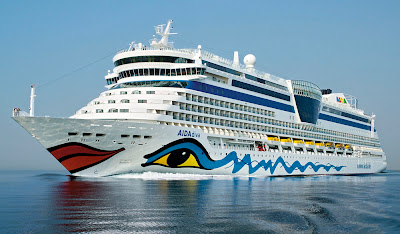 Colourful paintwork
Finishing the ship for display will make a real change from the standard grey of most warships. The Aida Diva is one of three sister ships (the others are the Bella and the Luna) that form part of the leisure fleet of an Anglo-American cruise line based in Germany, and what sets the Aida trio apart from similar cruise liners are their unusual liveries. 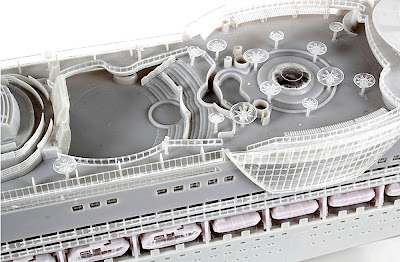 Luscious lips
Trademark emblem of the fleet is the bright red pair of lips at the sharp end, while a giant eye and blue stripes decorate either side of the hull. Set against white paint, the result is refreshingly different, both for the real thing, and doubtless for the models as well. Couple those markings with standard blue stripes on the upper superstructure, and tinted glass in the midships atrium and you have a handsome-looking ship. As for which of the three Aida vessels to model, it’ll be your choice - Revell will be supplying name decals for all three. 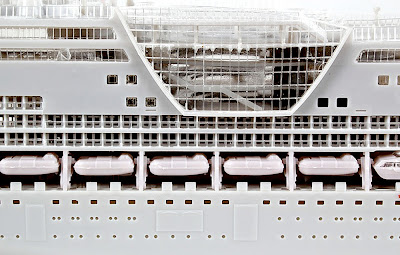 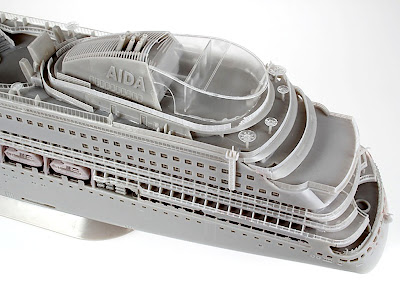 Entertainment afloat
Actually, in Aida-speak, that atrium section is titled the ‘theatrium’, marketing spiel for an onboard zone where passengers can choose from a choice of theatre, bars and market place. Seven restaurants, 11 bars, the biggest fitness gym and health spa afloat, mega-sundeck and three swimming pools are among the delights offered on each liner. Blimey! Am I tempted? Hmmm... I’m normally more of a small-ship man and mountain-biker, but a cheapo weekend offer could be tempting...
Visit Aida line (German language) here.
Various marine kits here.
Email ThisBlogThis!Share to TwitterShare to FacebookShare to Pinterest
Labels: Aida lines, cruise liner, Diva
Newer Post Older Post Home