AIRFIX SATURN 1B JOINS THE 'RETURN OF THE ROCKETS' 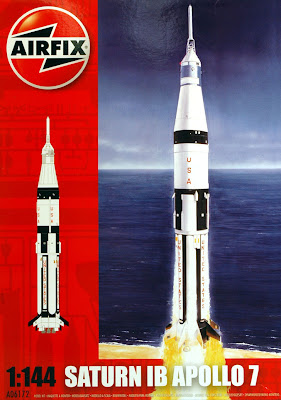 Mat Irvine reports:
Airfix plans to have reissued all its original 1:144 scale rocketry series by the end of 2011. The Apollo Saturn V and Vostok kits have already been released, as has the modified Skylab Saturn V.
Saturn 1B redux
Meanwhile the last of the original launchers - the Saturn 1B - has been reissued recently, and this one is likely the most welcome for collectors, as it was last available way back, in 1991. 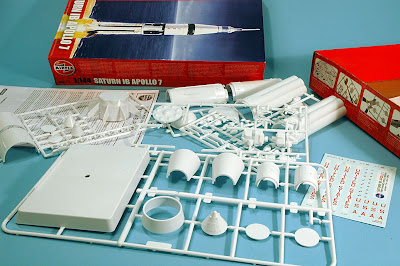 The new runner was first made for the Apollo Saturn V.
What's new?
The new Airfix Saturn 1B has the benefit of the updated Apollo section that was retooled for the recent Apollo Saturn V kit. In the 1B’s box is a runner for this item, plus a new version of the original rectangular base. The components not required any more have been removed from the tooling. There's also new box-art by Mike Trim, the illustrator who has also been responsible for the other rocket reissues.

Finished Airfix Saturn IB, standing on new base and nameplate decal.
Italian connection with Cartograf
There are also updated plans, and an updated decal sheet that includes some new markings, and - as with all Airfix kits - it is manufactured by Cartograf of Italy, which makes a  vastly superior decal set, compared with the original sheet.
Space Shuttle to come
The only Airfix item yet to appear is the Space Shuttle, and this is due later this year, complete with a new box, updated plans, and fresh decals.
Email ThisBlogThis!Share to TwitterShare to FacebookShare to Pinterest
Labels: Airfix, Mike Trim, Saturn 1B
Newer Post Older Post Home