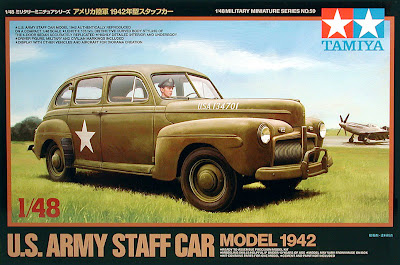 Mat Irvine inspects:
Although worldwide, model cars are dominated by the joint 1:24/25 scale, other scales find favour with various types of modelmaking. ‘Scale’ is an all-encompassing subject that could fill many an SMN slot, but one area that has grown in recent years is military AFVs to 1:48 scale. Yes, the main AFV scale is certainly 1:35, but it doesn’t match with much else, whereas 1:48 is one of the model aircraft standards, making mixing subject matter - especially dioramas - very straightforward. 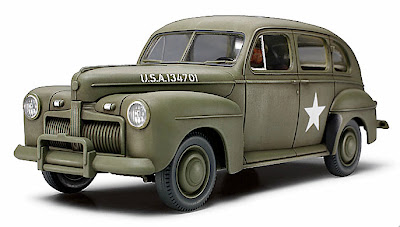 Kits to a smaller scale
Tamiya began the mixed-subject idea by reducing many of its AFVs from 1:35 to 1:48. Then some soft-skinned vehicles were released in the smaller scale, an interesting development as many of them could also be put to civilian use - and this applies to the 1:48 scale Tamiya US Army Staff Car, a militarized version of the 1942 Ford Super Deluxe Fordor sedan. 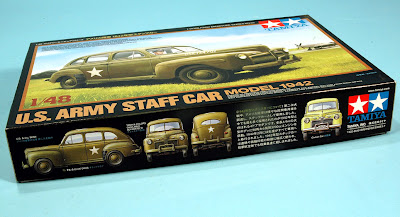 Wartime production
In February 1942, Ford stopped its civilian car and truck production, to become fully occupied with war work, such as building the B-24 Liberator bomber. In de-chromed military guise, the Fordor Sedan was produced as a transport and liaison Staff Car for the rest of World War II, until production finally stopped in Summer 1945. 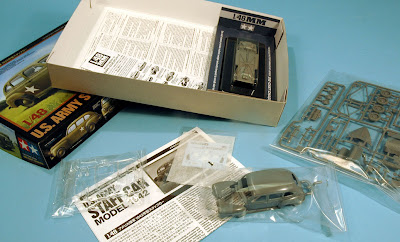 What’s in the box?
The Tamiya kit has just over 30 parts, a few more if you add the supplied military driver figure. A small decal sheet has numbers and white military star detail. A nice touch is Tamiya’s trademark item, a hefty diecast metal chassis ‘to give a bit of weight’, with plastic components moulded in light grey and clear. If you build the military version, virtually all the bodywork should be painted olive-drab, or as in the crashed UFO diorama I have pictured, it can also be finished in air force blue. 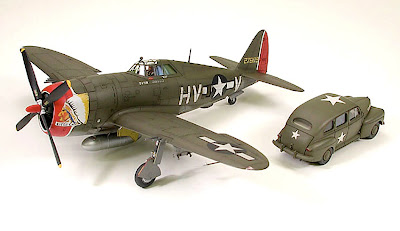 Size and presentation
When assembled, the Staff Car measures 101 mm (3.98 in) long, a size which shows off the rounded lines of the original well. Presentation is to the usual high Tamiya standard, with separately bagged components, detailed instructions, and ultra-precise detail work in the moulds. 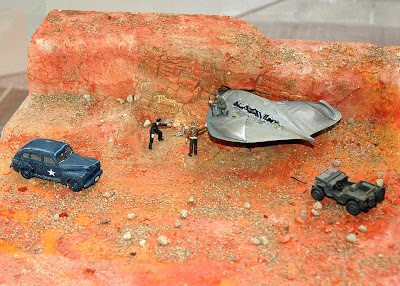 The Roswell UFO
I have pictured this as a 1947 scene, with the Staff Car attending the supposed place where an ‘alien craft’ landed in New Mexico; it's well known in UFO circles as the infamous Roswell Incident. Here the crashed UFO is the Testor resin kit that comes complete with figures, and the Army jeep is from the ‘new Frog’ company, Amaquest. The display is part of my touring exhibition, ‘One Small Step’. 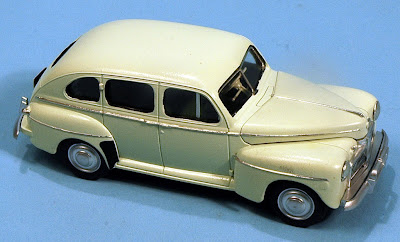 The car in Civvie Street
If you decide to build a civilian car - which the kit allows for - more details can be added. The main one is to add chrome which can be applied using BareMetal Foil, as with larger-scale kits. The job is certainly a bit trickier in this smaller scale, but if you do it right, the results are well worth the effort. 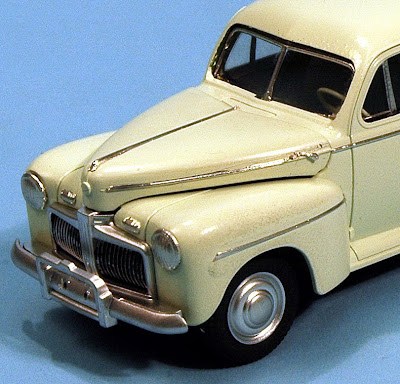 Ready-built alternative
Note that Tamiya also supplies the Staff Car in ready-built form, complete with subtle weathering, and supplied in a minimalist white cube of a box. If you want the car, rather than the effort of building it, this is a quick way to have a diorama accessory for zero effort. 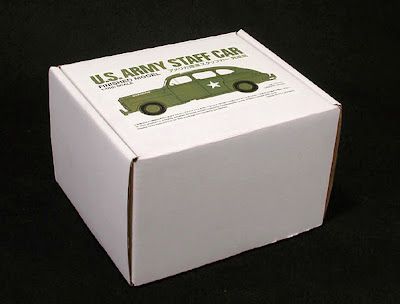