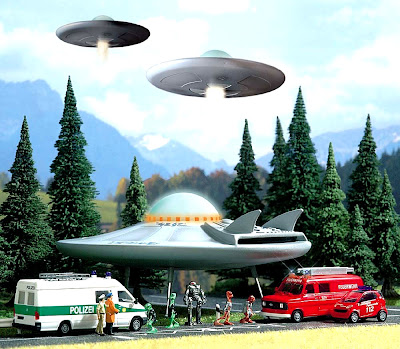 David Jefferis on close encounters:
On the night of September 19-20, 1961, the US couple Betty and Barney Hill reckoned they experienced a close encounter with a UFO. During the incident they ‘lost’ two hours, but survived intact, to file a report to US Air Force investigators the very next day. They claimed to have seen a silent, cigar-shaped craft, crewed by up to 11 humanoid aliens.
The Hill Incident
There was no hard proof for their story, but the Hills insisted it was true, and that they had been kidnapped for a short time by the UFO. The event became the first widely-publicized claim of an alien abduction, and was later published as the best-selling 1966 book The Interrupted Journey and the 1975 TV movie The UFO Incident.
Well, the Hill Incident took place half a century ago, and assorted UFO stories have rarely been out of the media since, or indeed, from toy and model company brochures. So what’s available right now? 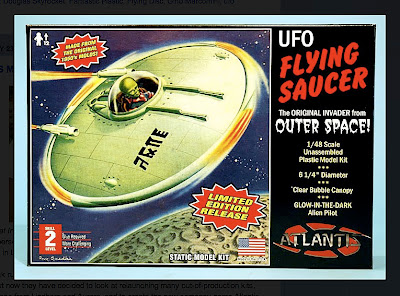 Atlantis UFO invader from outer space
This 1:48 scale model is a retro-delight, and should be in the collection of any sci-fi fan. Neatly moulded, with a 159 mm (6.25 in) circular fuselage, the UFO is equipped with a pair of propulsors and a clear central canopy, inside which an alien pilot sits. 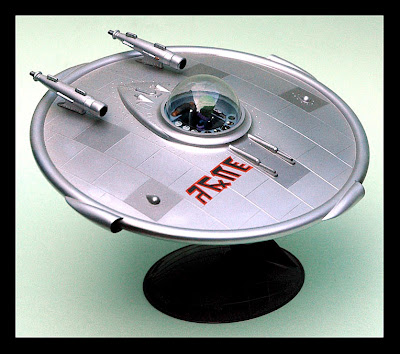 The ET pilot is moulded in luminous plastic, so if you want a glow-in-the-dark creature, you have it. If not, then paint his skin green (or any shade you fancy) for a more realistic effect. 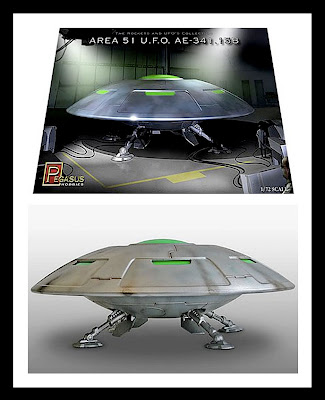 Area 51 UFO from Pegasus
Pegasus Hobbies produces the nifty UFO above to 1:72 scale. It's based on a design described in various accounts and sightings in and around the notorious ‘Area 51’ military base in Nevada. The Pegasus Area 51 UFO is 210 mm (8.25 in) in diameter, and comes complete with landing gear and open hatch panels, plus a set of closed hatches if you want to complete it as an in-flight machine. Clear diffused green lenses are supplied, which would make internal LED lighting an attractive option. 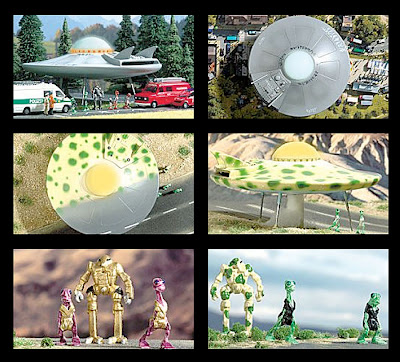 Busch picture shows a cute mottled auto-camouflaging UFO, plus assorted occupants.
Busch diorama
This German company supplies hundreds of model rail accessories, but the Busch UFO diorama makes a change from the more run-of-the-mill offerings. The nominally 1:87 scale UFO Flying Saucer kit features assorted lights and flashing effects, plus a quartet of ETs (‘extraterrestrians’ in Busch-speak) and one robot. The kit can be assembled in two modes - standing on extended landing gear, or taking off on what Busch calls an ‘energetic beam’, actually a slim plastic rod.

Parts layout for the Busch UFO.
Supplied lighting components
The kit comes with a set of coloured LED bulbs and pre-assembled electronic controls. Excellent stuff, and all complete except for the required 14-16 volt power unit, which you need to supply yourself. When assembled, the Busch UFO is 152 mm (6 in) across, and measures some 76 mm (3 in) high when settled on its landing legs. While it is notionally to 1:87 scale, you can change that at will, depending how you feel. Ah... the freedom that pure fiction delivers!
Read about Betty and Barney Hill here.
Visit Busch here.
Visit the Atlantis Model Company here.
Visit Pegasus Hobbies here.
Email ThisBlogThis!Share to TwitterShare to FacebookShare to Pinterest
Labels: abduction, area 51, Atlantis, Barney Hill, Betty, Busch, Close Encounter, Pegasus, ufo
Newer Post Older Post Home