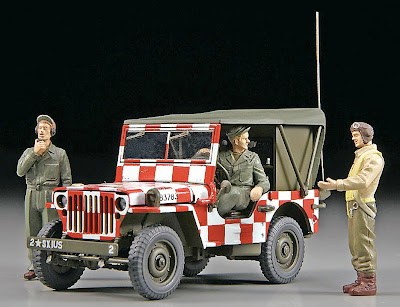 SMN report:
If you like the look of the 1:48 scale Revell B-17G we featured earlier this week, then these items could be just the thing if you’re into dioramas, or simply wish to add a few items to bring some life to a static model. 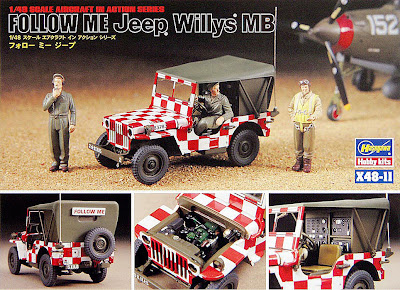 Follow-me Jeep
Follow Me Jeeps were used at airfields to help control ground traffic, with Jeeps that were far from the front lines painted with bright colors for clear visibility. This neat and detailed 1:48 Hasegawa model comes complete with a driver, radio operator, and pilot figure. Painting instructions are supplied for the red-and-white check model used by the US Army Air Force, plus khaki versions. 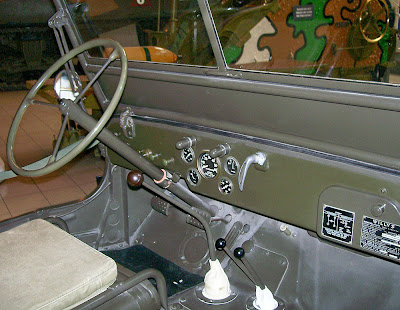 Plain-Jane dashboard
Interiors of military vehicles like this were generally very simple, though note that Hasegawa has included a rack of radio equipment in the back of the model, which just goes to show how things have moved on in the years since. The picture above, of a Willys Jeep fascia panel, was taken in the Imperial War Museum, London, used here courtesy 'Ekem'.


Why is called a Jeep?
Incidentally, the origin of the name Jeep has never really been agreed. Various reasons are given, ranging from an abbreviation of the words ‘General Purpose’ vehicle, to being named after the Popeye cartoon animal character, Eugene the Jeep. Either way, the Jeep as we know it became one of the iconic vehicles of WW II, with a grand total of 647,925 having been manufactured by the time the war ended in 1945.

Other Hasegawa figures
Hasegawa has quite a range of other figure sets in this scale too, not least the ones we show here. The World War II pilot set contains figures for four air forces - Japanese, German, US and British. They are sculpted in various poses, and with careful painting should add visual interest to any aircraft scene. 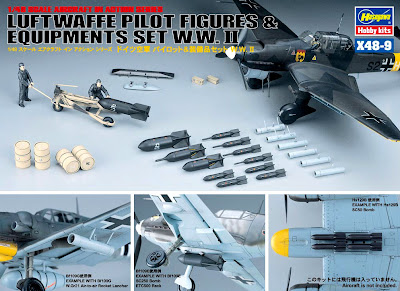 Equipment set
Hasegawa also produces a Luftwaffe equipment set. This one is particularly interesting for the variety of bits in the box - in addition to various figures, you get an assortment of bombs and rocket launcher tubes, plus a wheeled dolly to load them with. Weapon racks, oil drums and ammo boxes are also included. As you can see from the pictures, the selection provides any number of opportunities to set off a scene.