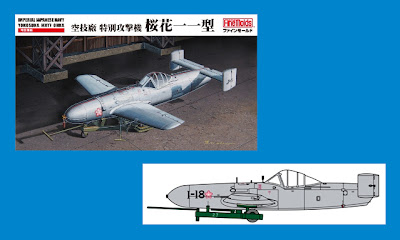 SMN report:
It seems to be ‘1:48 scale week’ here at SMN - and here’s another look at this scale with a beautifully produced pair of kits from FineMolds of Japan. Similar in concept to the automated German V-1 flying bomb, the single-seat Yokosuka MXY-7 Ohka ensured precise targeting by having a Japanese pilot onboard, to guide the deadly craft towards Allied shipping. 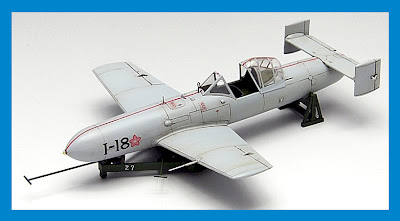 Ohka loading trolley
The MXY-7 Ohka flying bomb version has 69 cleanly-produced components, which fit together well. There’s a modicum of internal detail, but painted carefully, it will look OK. FineMolds has rightly included a loading trolley, on which the real thing was wheeled under its Betty mother-plane, ready for attachment before takeoff and flight. Colour scheme for these machines was usually a pale grey, and details for these are included, as is an accurately-printed decal sheet. The Ohka was a tiny little thing - at 1:48 scale the FineMolds miniature has a wingspan that measures just under 107 mm (4.2 in). 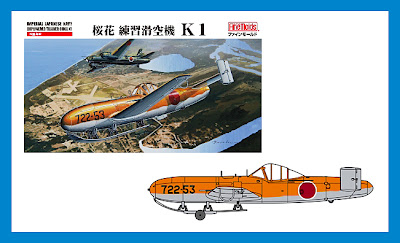 K-1 trainer
The bright-orange K-1 version is an equally neat FineMolds production, this time with 50 parts, and again has a ground-handling trolley included. The K-1 was a glider-trainer, with water ballast added instead of a warhead, and no engines. But the kit has an additional feature, which is the single underbelly landing skid, necessary for repeated flights. The combat version did not have this, due to its one-way mission status. 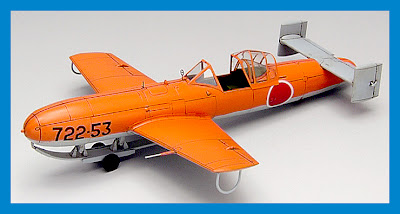 Human needed
Neither kit includes a pilot figure, perhaps a pity, though you can get the Hasegawa WW II pilot set to remedy this situation. However, FineMolds do an detail-up set (below) with metal-etch parts. 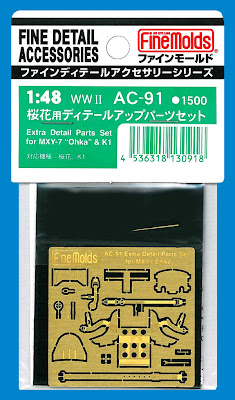 Operational details
The MXY-7 Ohka was usually carried by a Mitsubishi G4M2e ‘Betty’ bomber to within a short distance of its target. On release from the Betty, the Ohka pilot would first glide towards the target, then when closing in, he would light the three solid-fuel rockets, one at a time or together, accelerating toward the target ship.
Final approach was almost unstoppable, as the rockets gave the Ohka a burst-speed of some 650 km/h (400 mph) on the level, and up to 1050 km/h (650 mph) in a steep dive. Had World War II gone on longer, later versions were in hand that could have been launched from coastal air bases and caves, even catapult-equipped submarines. More than 850 Ohkas were built, but only a few hit their targets - just seven Allied ships are recorded as being damaged or sunk.

Yokosuka K-1 Trainer, picture taken at the USAF Museum by ‘Stahlkocher’. The picture clearly shows the landing skid on this variant, plus the distinctive twin-tail layout. 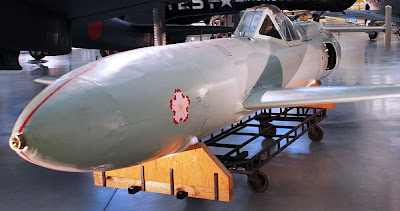 This is a rare jet-powered version, on display at the Steven F. Udvar-Hazy Center, Virginia. The re-engining intention was to add extra range to the rocket-powered standard Ohka, which had to be launched only about 37 km (23 miles) from Allied ships. The slow-flying Betty mother-planes that carried Ohkas were easy meat for defending fighters, so the added range could have made the fast and small Ohka a much more dangerous weapon.
Model pictures courtesy FineMolds. Visit here.
The Ohka is also available from HobbyLink Japan here.
Other FineMolds kits here.
Email ThisBlogThis!Share to TwitterShare to FacebookShare to Pinterest
Labels: Betty bomber, Cosford Air Museum, flying bomb, K-1, MXY-7, Ohka, rocket bomb, Steven F. Udvar-Hazy Center, V-1
Newer Post Older Post Home