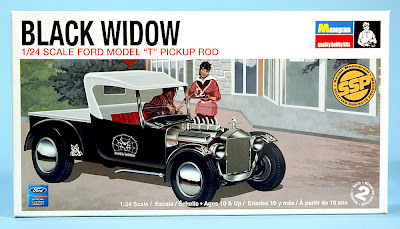 Mat Irvine looks at a blast from the past:
Although the vast majority of modern car kits are fully detailed with many intricate parts, sometimes it’s nice just to do a straightforward easy build - and this can also involve a blast from the past, like this 1:24 scale Monogram Black Widow. 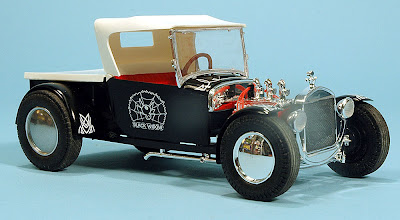 Bzzz... the insects are coming
Monogram made its first car kit in 1954 and within a decade had a wide range of automotive subjects for the modeller. These included what could be termed the ‘Insects in Color Series’, in that it included the Green Hornet, Yellow Jacket, Blue Beetle, and Black Widow. (Yes, we know Black Widow spiders aren’t insects, but it spoils the flow if the list goes, ‘Insects and Arachnids…’) 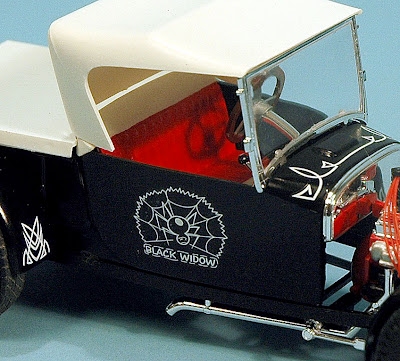 Tasty hot rod
The Monogram Black Widow is a generic vehicle that wasn’t based on a particular original, instead incorporating various hot rod features from the 1950s and ’60s. This is basically a mix of favourites - a 1927 Ford T with pick-up bed, a classic small block Chevy engine, and Moon Disc wheel embellishers. 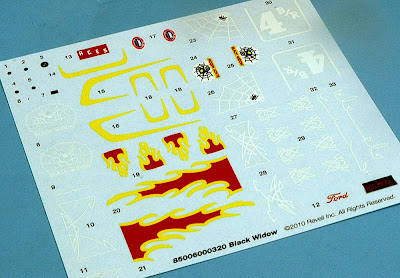 The extended decal sheet includes many markings, but you don’t have to use them all!
The SSP Program
The Black Widow was around for many years, while kits got more sophisticated, but was eventually dropped, being considered too simple. But then Revell-Monogram introduced the Selected Subjects Program (SSP) which aimed for the reissue of many of these early kits. At that time the Black Widow wasn’t amongst them and the heydays of the SSPs, with up to 48 reissues a year passed, as frankly, most of what was available had been reissued. However the SSP concept continues, and individual kits do get issued from time to time.
Improving a basic kit
The kit is very straightforward to assemble, but still has 54 parts, moulded in black, white, chrome-plated and clear. The engine block is simply two halves, with separate chrome-plated rocker covers and intake manifold. You can easily improve it by washing transparent red paint in the grooves of the rocker covers to bring out the detail. Although from an era when this wasn’t commonly modelled, there is a semblance of a distributor, so adding ignition wiring is a possible detailing job that will be rewarding.
No more motor
One thing that has not been reissued is the original motorization option, which means there’s an odd triangular part that you may very wonder: “Where does that piece go?” It was actually part of the electric motor support that fitted under the bodywork! 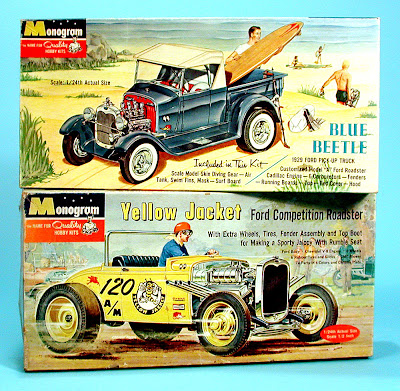 Two of the other Monogram ‘four wheeled insects’ not reissued as yet, the Blue Beetle and Yellow Jacket.
Blue beetle wanted
Back to our ‘insects’ (and spiders), the Green Hornet has already been reissued as an SSP, so maybe we can hope for the others at some point - for me, the Blue Beetle is tempting, based as it was on a Ford Model A pickup, with a range of surfing and diving gear for the pickup bed. 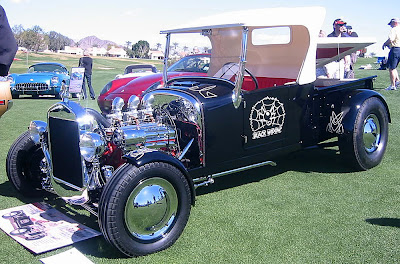 Life-size Black Widow
Intriguingly, having started as a fictional 1:24 scale model kit, there is a 1:1 scale Black Widow on the show circuit, though it isn’t a precise replica. However, building a full-size car from what started as a model isn’t new, as I showed in my Zingers article, though admittedly even ‘full size’ they weren’t exactly drivable. However Monogram’s Red Baron did get built as a full-size show rod, that was driveable.
Thanks to Revell-Monogram for the review kit.
Visit Revell here.
View the full-size Black Widow here.
Email ThisBlogThis!Share to TwitterShare to FacebookShare to Pinterest
Labels: hot rod, monogram
Newer Post Older Post Home