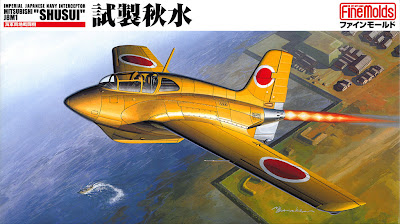 SMN report:
While we’re on the subject of rocket-powered Japanese aircraft (Okha article last week, see link below) here is another 1:48 scale release from the FineMolds stable, the Mitsubishi J8M Shusui (‘Sharp Sword’), a single-seat World War II interceptor based closely on the German Messerschmitt Me163 Komet. 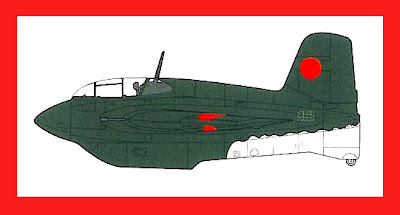 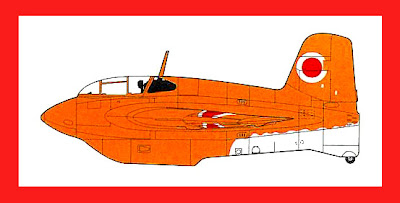 Optional markings
The Shusui was a small machine, though bigger than the Ohka - to 1:48 scale the Shusui’s wingspan is just 198 mm (7.8 in), with a nose to rocket-nozzle length of some 126 mm (4.97 in). There is a choice of markings, green or orange, both with the blood-red rising sun meatball for wings and tail. 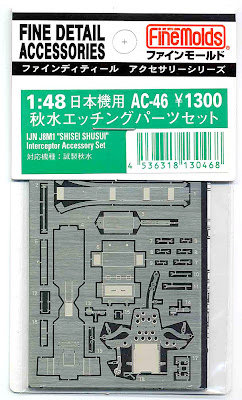 Accessory pack
There is also an accessory set available separately, with a raft of metal-etch components to improve the already excellent mouldings. Of particular note is the seat panel, with sharply-defined seat-belt and D-ring harness. There are a number of spanners supplied too, quite remarkably fine at this scale - definitely a case of ‘magnifying glass required’. Unlike the Me 163’s bubble canopy, the Shusui had an eight-piece design, and FineMolds has faithfully reproduced this, along with a single landing skid under the fuselage. 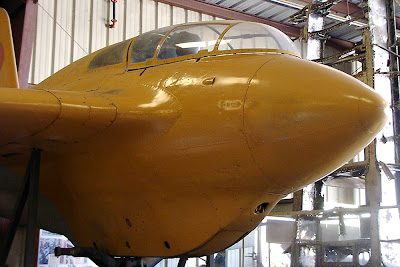 Shusui picture taken at the Planes of Fame Museum by ‘Sekinei’.
Designing the Shusui
The Me163 Komet did see service and even a few combat kills, but the Shusui never went beyond testing. The original intention had been to build Me163s under licence from Germany, but the purchased aircraft, engines, and plans were sunk by Allied forces while on their way to Japan by submarine. But there was another answer - the Shusui was ‘reverse-engineered’ by Japanese designers, an impressive task, as they had had little more than flight manuals and appearance to go on. The engine was a Toko Ro KR10 liquid-fuelled rocket motor, which could power the Shusei for up to 5.5 minutes, more than enough time to climb above high-flying B-29 Superfortress bombers, then dive among them to attack with a pair of 30 mm cannon.
First-flight disaster
The Shusui prototype was ready for flight by mid-1945, and on July 7 was test-flown by Lt Cmdr Toyohiko Inuzuka. Only a few seconds after takeoff, the engine stopped, the aircraft stalled, and although Inuzuka managed to glide it back to the runway, he hit a building at the last moment, and the plane caught fire. He died the next day. Investigation showed there had been a fuel pump problem, and further flights and developments were planned after modifications, but the atom-bombing of Hiroshima and Nagasaki in early August put an end to this. Those two devastating explosions brought about the surrender of Japan and the end of the war.
SMN Ohka article here.
Model pictures courtesy FineMolds. Visit here.
Visit the Planes of Fame Museum here. 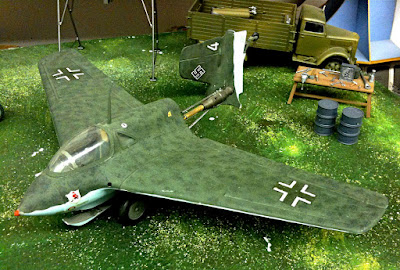 The German Me163 was the inspiration for the Shusui. Model by Mat Irvine.
Email ThisBlogThis!Share to TwitterShare to FacebookShare to Pinterest
Labels: FineMolds, Inuzuka, Komet, Me163, Plane of Fame Museum, Shusui
Newer Post Older Post Home