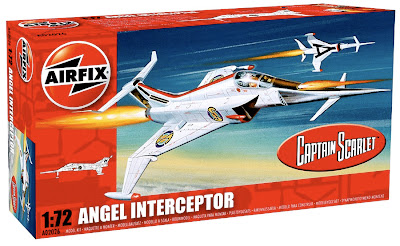 SMN update:
It’s good to report that Airfix have reintroduced an old sci-fi classic kit, the Angel Interceptor from the Gerry Anderson supermarionation television series Captain Scarlet, first shown in the late 1960s. It’s to 1:72 scale and is an ultra-simple build, with just 23 components to assemble. From canard-equipped anteater nose to Spectra-Fan air ramjet tail, the model measures some 185 mm (7.3 in) long.

Female pilots
As portrayed, Angel Interceptors were fast, being able to fly from their Cloudbase HQ at more than Mach 4.5 - approximately 4800 km/h (3000 mph) - at altitude. They were flown by a group of female pilots, codenamed Destiny, Harmony, Melody, Rhapsody, and Symphony, who sat in what must be the biggest cockpits ever made. A glance at a closeup shot revealed room inside for a grand piano... or maybe a male admirer or two, as those girls were rather dishy, even if they were only puppets.

The Airfix Angel story
The kit has a long history, going back more than four decades. It was first on sale from 1968-1984, with a concurrent Snap’n’Glue version added to the list in 1981. There are other versions of the aircraft around, notably various Imai kits, but the Airfix model seems to be the most accurate. However, the scale is a bit difficult to work out, and that enormous cockpit is the giveaway. The Airfix kit has a pilot figure that fills the cockpit more effectively, but it also has the effect of reducing the theoretical 1:72 scale of the Interceptor by maybe 20 percent overall. However in other respects the kit is neat enough, and questions of scale aside, looks good when built. 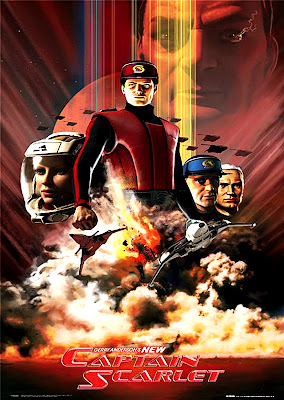 Farewell puppets, hello computers
The New Captain Scarlet series first aired in 2005, and was a massive upgrade in terms of technology, with no more puppets. Instead, impressive cgi was used for animation - now called Hypermarionation - and all the vehicles were redesigned, mostly with great success. Watch out for a closer SMN look at the series and available models, especially a pair of Corgi diecasts - truly excellent stuff.

Heaps of Gerry Anderson stuff here including the White Falcon, the updated replacement for the Angel Interceptor.

TSR.2MS rocket bomber
And not forgetting another notable Airfix sci-fi kit here, the TSR.2MS, which can be built either as the RAF supersonic bomber that never was, or as a rocket-boosted sci-fi asteroid-killer - take your choice! 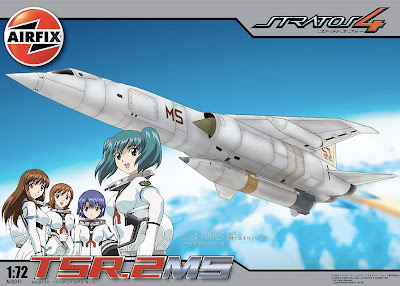