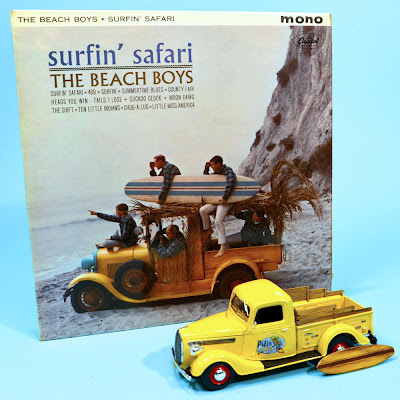 Cruising with Mat Irvine:
Go and dig out your copy of Surfin’ Safari by The Beach Boys, original LP in mono, as their early albums were recorded in mono. Brian Wilson was already partially deaf in one ear, making stereo recording a bit redundant from his point of view. 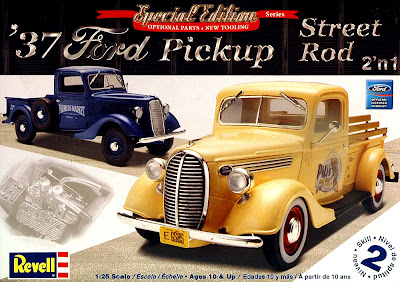 Sound of the Sixties
On the album sleeve is a lineup of the group scanning the horizon for that clean beach break, all on board a 1929 Ford pickup, decked out in palm fronds, with Mike Love and Brian Wilson clasping a surfboard. The whole thing was of course set up for the album shoot, the pickup was borrowed, the palm fronds added for dressing. It also sidesteps the fact that only Dennis Wilson - here in the driving seat - could actually surf, but that didn’t stop the group setting the sound of the sixties, and epitomizing surf culture. 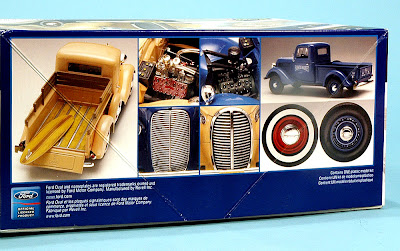 Pickup from Revell
Even if the pickup on the album sleeve wasn’t a true board-carrier, using such vehicles for the task was commonplace, and this recent 1:25 scale kit from Revell-Monogram carries on the theme. It’s a somewhat later vehicle than the one on the album, being a 1937 Ford, but one of the options for the 2’n1 kit is to build it as a surf shop Street Rod. As such, it has an optional 1938 grill, new hood and side panels, lowered suspension and engine hop-ups. And you get a surfboard. Surf shop decals are supplied, as is the ‘woodie’ finish for the pickup bed and optional side stakes. 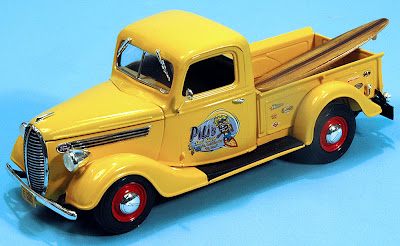 Kit choices
There’s a bunch of choices packed into Revell’s chunky box, but they boil down to one basic yin or yang - surfer-dude or potato-hauler. Revell has included enough parts to build either version, so you can take your pick - or you might well decide to pick and choose to make a combo ‘your own way’, as they say in burger restaurants. 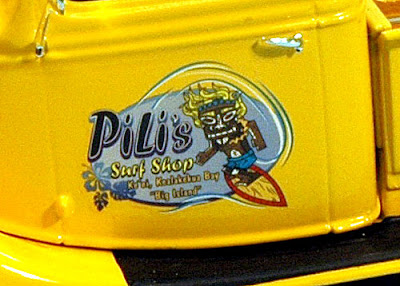 Farmer’s Market Ford
Taking the Farmer version first, the kit shows off this post-Depression hauler very well, with a recommended sobersides overall navy-blue finish, and just the ‘Farmer’s Market’ logo to apply by way of decoration. Wheels are the same shade, with a supplied set of chrome hubcaps to brighten things up. The engine is in ‘any colour so long as it’s black’, but you can give it some visual interest by highlighting the various nuts and bolts on the heads and other areas. At least it looks the part, set off well by the standard-issue horizontal-bar grille in front. All in all, a fine basic kit, with the opportunity to add some features from the Street Rod version if you wish. 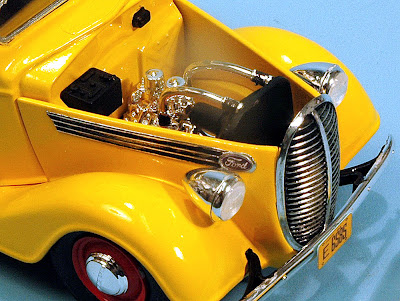 Street Rod Ford
Next up, the other half of this 2’n1 production, the Street Rod. Dressed up as a mildly customized vehicle, the pickup swaps the Farmer’s Market decal for Pili’s Surf Shop, complete with Hawaiian-masked surfer figure, sun-bronzed of course. On the sides are chrome strakes, while the engine has a custom look, as does the front grille. The pickup load bed has metal anti-scrape floor bars, and the supplied surfboard sits neatly there. Wood-look side stakes are available to increase the bed height. If you like whitewall tyres, you can have them, though it’s fair to say that any of these Street Rod items would look just as good added to the Farmer truck. The choice is yours. 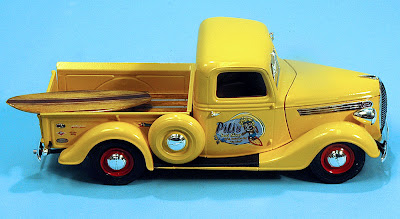 Nice detailing on the load bed. 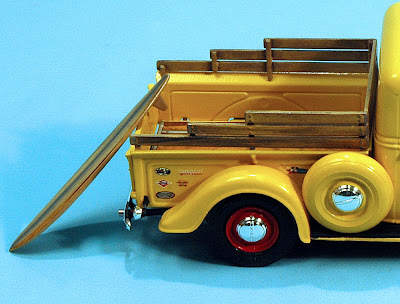 Who's who on the album sleeve
Completing the lineup on that LP sleeve are Carl Wilson in the pickup bed, and sitting on the hood is David Marks, who replaced Al Jardine for the first four albums. Bruce Johnson joined the group later.
Email ThisBlogThis!Share to TwitterShare to FacebookShare to Pinterest
Labels: Beach Boys, Ford pickup, Street Rod, Surfin Safari
Newer Post Older Post Home