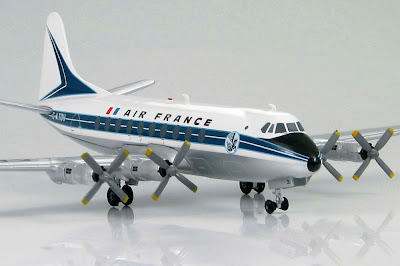 SMN report:
Air France is one of the world’s grand old airlines, with a history going back to 1933, when it was formed from the merger of five smaller French airlines. It has added two more French airlines since then, and is now merged with the Dutch airline KLM. The huge company currently flies a mixture of more than 250 Airbus and Boeing aircraft. 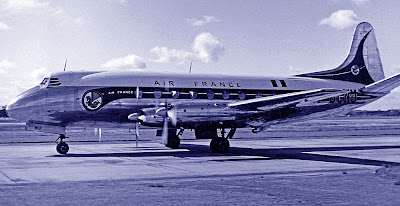 Long history
For modelmakers, there is all that history to draw on, with splendid aircraft like the Lockheed Constellation and the ill-fated Concorde to name just two. Another favourite here at SMN is the Vickers Viscount, (above) a smooth and quiet turboprop airliner that was highly successful worldwide from the 1950s to the 1980s. At least one airworthy commercial Viscount remains, which means that the aircraft has been in continuous service since its first flight in 1948 - an amazing 63-year record. 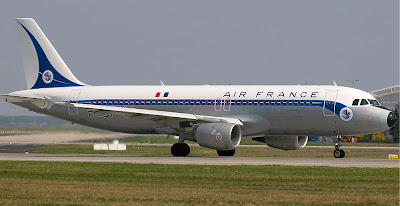 Airbus Retrojet
If you prefer a modern jet, then the Airbus A320 ‘retrojet’ (above) is the one for you. It was painted up in that attractive heritage ‘Pegasus’ scheme in November 2008, to celebrate the airline’s diamond anniversary, with an intention to return the aircraft to current markings in 2010, though we are told that it is still flying unchanged. Nice!
Which model to choose
Choosing which of the many, many Air France aircraft to model is a bit of an issue - there’s so much choice! So we’ve picked a quartet here, easily sourced either from model stores or for the rare ones, a trawl of eBay is the best place to look. 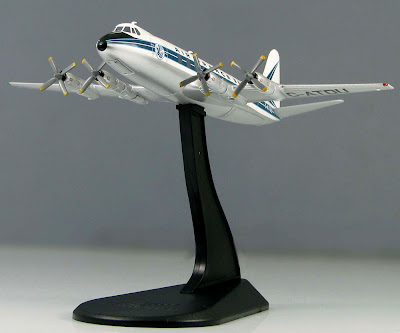 Vickers Viscount from Hobby Master
For model collectors, we’ve chosen two, the 1:200 scale Hobby Master Viscount (above) and the 1:144 scale DC-3. The Viscount is all-metal except for props, horizontal stabilizers and landing gear. The Air France markings are neatly applied (though the tail stripe looks a bit angular) and perhaps the wing-fuselage joint looks a little on the heavy side. Windows are not glazed, but the airliner looks very convincing despite this. A downer is that HM has missed the chance to show a unique Viscount feature, the triple-pane flight deck side windows - a case perhaps, for a fine camel-hair brush to go into action. 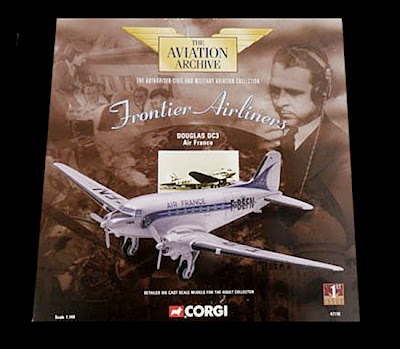 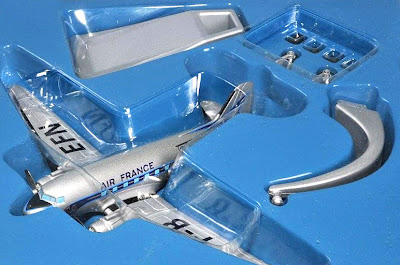 DC-3 from Corgi
The DC-3 (above) is a typical Aviation Archive release from Corgi, arriving in a sturdy box with all parts separately cocooned in a blow-moulded plastic inner tray. It’s a reminder of just how hefty these metal models are, compared with even a big plastic kit, and we reckon that feeling of solidity is a big draw for the whole diecast aircraft genre. Only downside (and it’s only a matter of taste) is the baby-blue that Corgi chooses for its airliner windows. 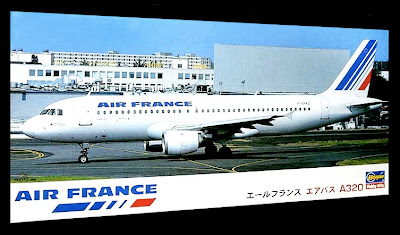 Hasegawa A320 twinjet
A 1:200 release from Hasegawa, the model rewards a careful build, especially when it comes to applying the very delicate decals. Overall though, if you put in the effort - and pay great attention to dihedral angles - this will result in a model that looks superior in every way to even the best diecast equivalents. The landing gear in particular looks streets ahead of any diecast equivalent we know. 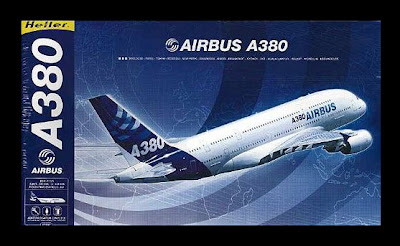 Heller A380
This is BIG kit of a BIG airliner, and to Heller’s near-unique 1:125 scale, it makes an impressive model indeed. 241 components are packed into the box, and if 1:125 is on the large side, then Heller also makes a smaller 1:800 version, though not in Air France markings.
Closer look at Heller
Heller has a nifty website here, where you can download the current catalogue. There are some mouthwateringly unusual items, such as a 1:72 Saab J-21 pusher-prop fighter, French warships galore, a 1:24 Jules Verne space truck, even a detailed model of the Eiffel Tower.
Hobby Master Viscount here.
Corgi DC-3 at Amazon here.
Hasegawa A320 on ebay here.
Heller A380 here.
Email ThisBlogThis!Share to TwitterShare to FacebookShare to Pinterest
Labels: A380, Air France, DC-3, Heller, Hobby Master, Vickers Viscount
Newer Post Older Post Home