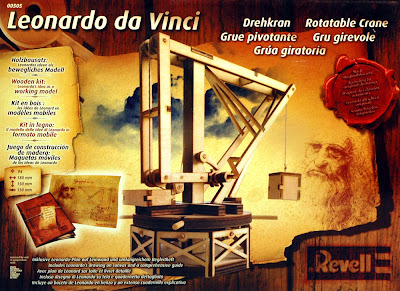 Mat Irvine looks at the work of a master:
One of the modelling surprises over the last year has been the revival of interest in Leonardo da Vinci’s creations. It was tried in the past, most significantly by AMT in the 1970s, when the company issued three Leonardo kits. But the series did not take off, and a proposed second batch of three kits was abandoned. Perhaps the modelling world was simply not ready for the Renaissance Man, but now we seemingly can’t get enough of him! 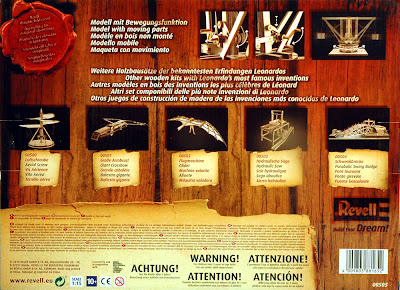 Plastic or wood?
As reported in SMN, we’ve seen traditional plastic construction kits in examples from Italeri, Academy and Doyusha, but one company has stood out  from the herd. Revell Germany has decided to make its da Vinci kits in a material Leonardo would easily recognise - good old-fashioned wood, as displayed in the Revell Rotatable Crane kit. 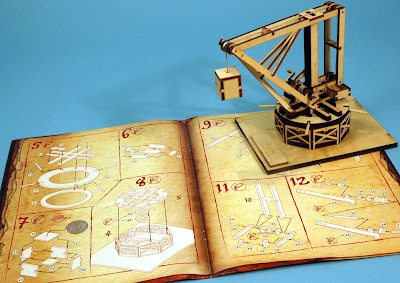 Laser-cut parts
Even if the kit’s material is primarily wood, much of the hard work has been done for you, as the parts are laser-cut, needing only slight sanding of edges where necessary. As with other Revell Leonardo kits, you get the parts, plus a wealth of printed material. There’s the main instruction booklet, a parts layout, an information booklet in five languages, and a frameable faux-parchment sheet, printed with Leonardo’s original sketches and specular (right-to-left mirror) handwriting. 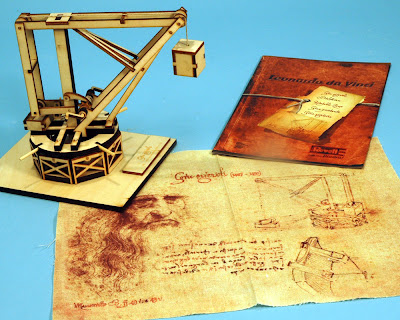 Completing the crane
The components assemble neatly, with no real dramas as they go together. The circular base has a windlass arrangement allowing it to rotate, while the lifting handle and hoist-brake both work efficiently. The load is a simple cube, but there’s nothing to stop you changing it for something more interesting - perhaps a load of stones, or joists. Revell has supplied a printed nameplate, which sets the model off nicely. 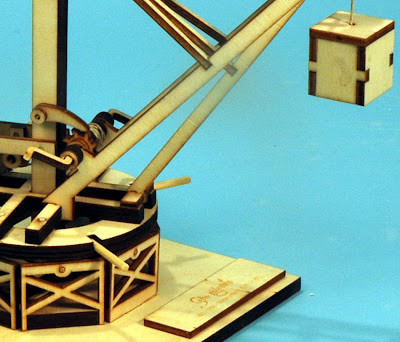 New or old?
Note that the wood in the kit has an authentic-looking ‘aged’ appearance, but of course, there’s no reason why the wood used in a new crane would be anything other than fresh from the sawmill. In this case, it’s a byproduct of the laser-cutting procedure - a neat mix of old and new technologies!
Leonardo and Brunelleschi
As with much of Leonard’s work, the crane was not all his own design. He adapted an existing example, built by architect Filippo Brunelleschi to hoist large and heavy objects, mainly for constructing cathedrals. Not that this knocks Leonardo in any way - much of his skill lay in refining existing examples, and the sketches shown in this Revell kit were likely drawn while Leonardo watched building works in Florence or Milan. 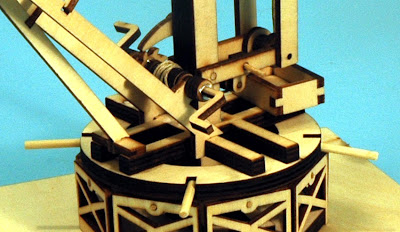 Latest technologies
It’s an interesting realisation that Leonard was fully conversant with the technologies of his time, as can be seen in the myriad of drawings, but he would almost certainly have understood many of today’s techniques. If you showed Leonardo a car from, say, the 1960s, he could probably fathom the workings of the mechanical parts - engine, gearbox, differential, suspension - quite easily, but would almost certainly be flummoxed by the radio! And for anything newer, the electronic devices on board would have baffled anyone from an earlier age.
More Leonardos from Revell-Germany have also just arrived, now making ten in all. More on these soon.
See the current range of Revell Leonardo da Vinci kits here.
Email ThisBlogThis!Share to TwitterShare to FacebookShare to Pinterest
Labels: Leonardo da Vinci, Revell, Rotatable Crane
Newer Post Older Post Home