SMN report:
We’re a bit tardy with this info, but there’s still time to bag a bargain. Fantastic Plastic, which styles itself as: “The Virtual Museum of Flying Wonders!” certainly gets our vote for creating and marketing the widest range of rare and odd machinery, both real and fictional.
There’s plenty to choose from in the sale, though as we’re in Star Trek mode just now, there are three kits that look particularly interesting. 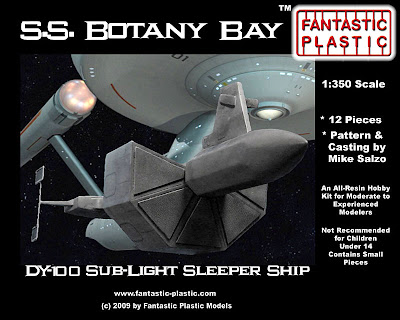 Sleeper ship DY-100 Botany Bay
First off, the 1:350 scale Botany Bay. It’s a simple resin kit with just a dozen components, and comes in ‘bare-metal’ finish - that’s to say, decals are not included, though that’s no great problem for this sort of subject. 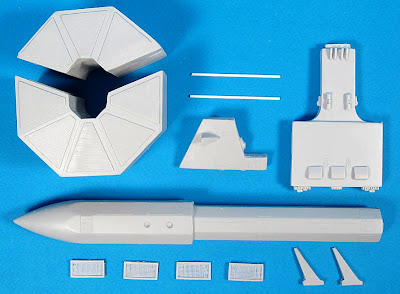 A word about the ship itself, which appeared in the first-season episode ‘Space Seed’, itself forming the basis for the 1982 motion picture Star Trek II: The Wrath of Khan. The DY-100 was powered by sub-light ion engines, so the crew had to spend years-long voyages in suspended animation. The ship, work of art director Matt Jefferies, was later used as an automated ore carrier in the episode, ‘The Ultimate Computer.’ 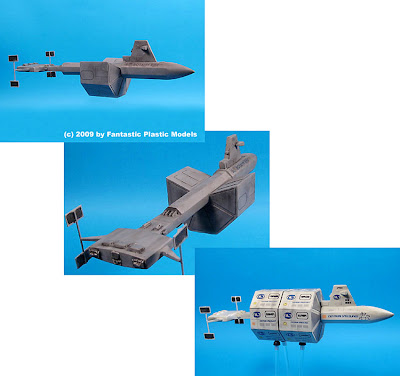 Botany Bay in plain finish, and sprayed white, with commercial spaceline decals. Take your pick as to which kind of marking scheme you prefer. 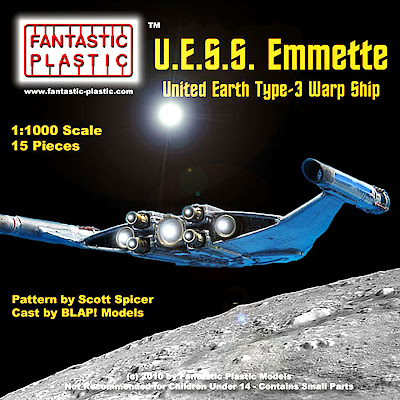 USS Emmette Type-3 Warp Ship
This 15-part starship is made to a tiny 1:1000 scale, but is interesting for being seen only briefly in the series. According to Fantastic Plastic, it is: “glimpsed only briefly in the opening credits of Star Trek: Enterprise following the launch of the Phoenix One warpship and the unveiling of the NX-01. Shown approaching what appears to be a Moon base (In the Fourth Season ‘Mirror Universe’ opener, it bombs the Moon base) the craft disappears and is never referenced again.” 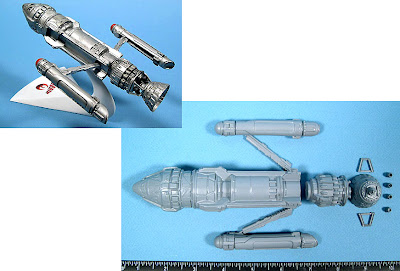 Phoenix Warp Ship One
This resin 13-part kit is to the more widely-used 1:144 scale, and features the very first warp powered spaceship. As FP puts it: “Launched into space by a highly modified Titan V ICBM, the Phoenix was humankind's first operational warp-powered spacecraft. Designed and built under the direction of Dr. Zephram Cochrane during the aftermath of WWIII, the Phoenix - with a crew of three - made its first successful launch from Montana on April 5, 2063. It was shortly thereafter that humanity had its first encounter with an alien race - the Vulcans.”
Summation
A fascinating sci-fi trio from FP, with plenty more to choose from on the site, including many non-fiction 'what-if' subjects. Sale ends on October 16.
Pictures courtesy Fantastic Plastic. Visit the site here.
Email ThisBlogThis!Share to TwitterShare to FacebookShare to Pinterest
Labels: Fantastic Plastic, Star Trek, Vulcan
Newer Post Older Post Home