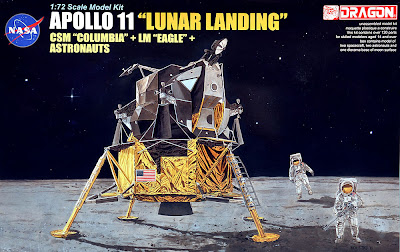 Mat Irvine looks inside:
Model companies can spring surprises, and such was the case when Hong Kong-based Dragon recently announced brand new 1:72 scale kits in of the Apollo craft. Anyone familiar, even in passing, with kits of space subjects will be bound to know of the Airfix Apollo Lunar Module. It was first released many years ago, but was recently reissued with updated painting instructions and details (by me!) to correct the colour scheme, which since the very beginning has been wrong. (Or maybe ‘not quite right’…) 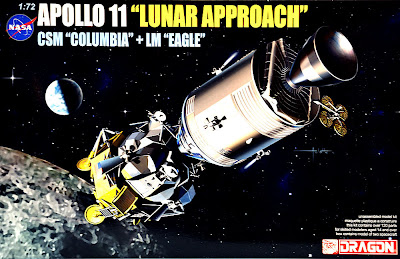 Complete Apollo spacecraft
However, with the first Apollo Missions now 40-plus years old the idea of new kits of may come as something of a surprise, though on the face of it no-one turns a hair at the announcement of another Spitfire or Bf109, so on that logic why should spacecraft be different? What makes these Dragon issues especially welcome is that we don’t get just a Lunar Module (it has long been one of those modelling mysteries as to why Airfix made only the LM) as this time you have a complete Apollo spacecraft, consisting of the Lunar Module Eagle and the Command/Service Module Columbia. 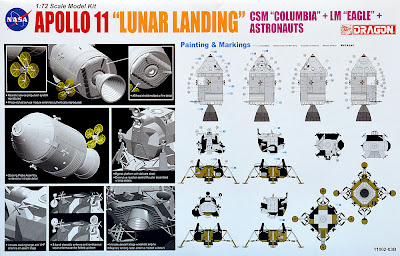 Base of the 'Lunar Landing' box shows details, decal positions and complex colour scheme.
Correct type
And in case anyone is asking: “Surely Tamiya made a similar kit?”, yes it did, but firstly this was to 1:70 scale, not 1:72, and secondly - and more importantly - the Service Module was the Block I type, only used for unmanned test flights, not the Block II that carried astronauts to the Moon. So although the subject matter is maybe a blast from the past, at least half of the Dragon kits are brand-new so far as  models of the full-size machinery is concerned. 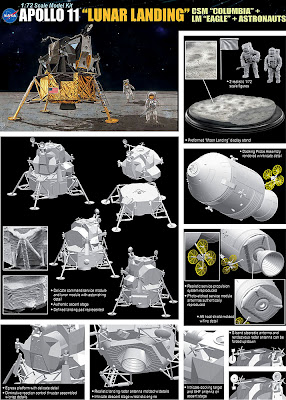 Dragon cgi images show development details - note the photo-etch parts shown gold.
Approach and Landing kits
Dragon’s Apollo comes in two versions, duplicating major stages in the flight. The 'Approach' kit represents Apollo on its way to the Moon, in that the CSM and LM are attached, The 'Landing' kit shows LM on the Moon, with a support rod to show the CSM in orbit overhead, though this obviously not at a scale distance. Dragon supplies an excellent lunar surface base for this one, which seems a pretty accurate representation of the landing site, plus nicely sculpted figures of Neil Armstrong and Buzz Aldrin. 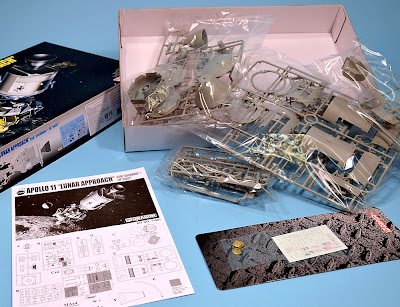 Good stuff in the 'Approach' box.
Lots of components
Both kits are comprehensive, with well over 100 parts each. Moulded in light-grey plastic, with photo-etch brass parts for the high-gain antenna dishes carried by the Service Module. Even the ‘crunched foil’ look on the LM is reproduced neatly enough in plastic. 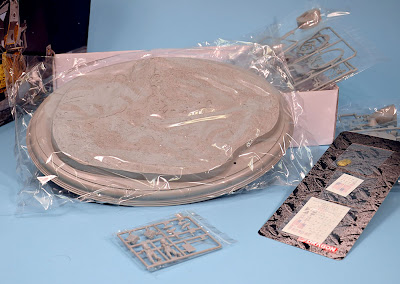 Well-engineered chunk of lunar terrain gives the LM somewhere to land on.
More on these excellent-looking kits when I’ve built them!
Thanks to the Hobby Company, the UK importer and distributor for Dragon for the samples.
Email ThisBlogThis!Share to TwitterShare to FacebookShare to Pinterest
Labels: Apollo 11, Buzz Aldrin, Dragon, Neil Armstrong
Newer Post Older Post Home