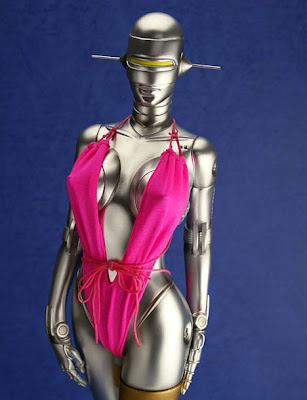 SMN report:
To science-fiction fans of a certain age - and robot lovers in particular - the name Hajime Sorayama may well be a revered one. For 64 year-old Sorayama made his name in the late 1970s and 1980s for producing beautiful airbrushed illustrations of ‘sexy robots’, humanoid machine-beings apparently made of gleaming metal, and most importantly, looking highly feminized. The bottom line was that, unlike standard-issue nuts-and-bolts droids, they were utterly gorgeous pin-up material. 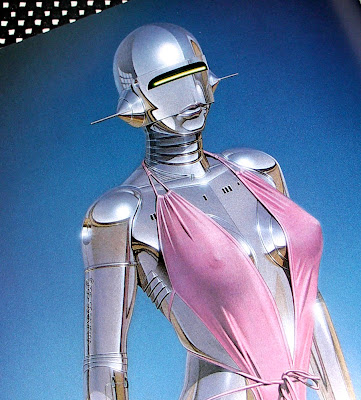 Sexy Robot books
Coffee-table books of Sorayama’s works were published in their thousands (above) but it’s only recently that his sexy robots have made the journey from the printed page to three-dimensional miniatures. 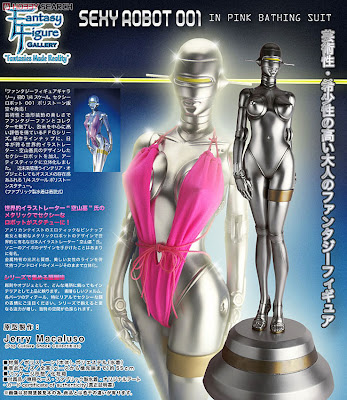 From book to model
Now it’s the Japanese model company Yamato that has done the job. With Sorayama’s approval, Yamato has produced a very neat ready-built miniature robot, standing some 560 mm (22 in) high. It (she?) has a lustrous chromed finish, and like the original airbrush illustration, wears a candy-pink bathing suit, tastefully covering the naughty bits. Also, she (it?) wears a very stylish gold-finish garter on one leg, which accentuates the sleek appeal of the whole concept. Unlike a human female, we bet she doesn’t answer back, complain about dirty socks, or demand a hand with the washing-up either! 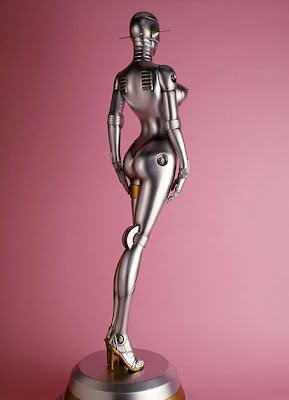 Clothed or not?
There’s a second, unclad sexy robot available too, but we reckon the model wearing the pink one-piece is the one to have - after all, if nude automata are your thing, the fabric item can be gently removed, to reveal the bare metal (actually, resin in this miniature) underneath. 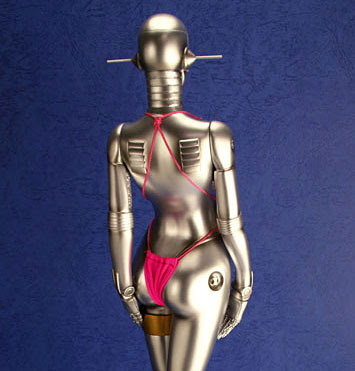 Talking about sexy robots
It’s worth quoting the somewhat breathless advertising caption on the Yamato website, as perhaps the copywriter has a thing about sexy robots: “Do androids dream of electric sheep? We may never know. Fortunately, neither androids nor humans have to rely on dreams for visions of this metallic beauty as Yamato USA proudly makes the fantasy world of Hajime Sorayama a reality.” Whoa! So that’s all right then!

For any collector of robots, let alone sexy ones, this is an unmissable treat.

All sorts of robots here. 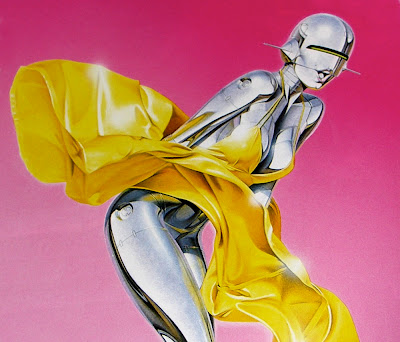 Another image from the book, this one echoing Marilyn Munroe's classic pose. Love it!