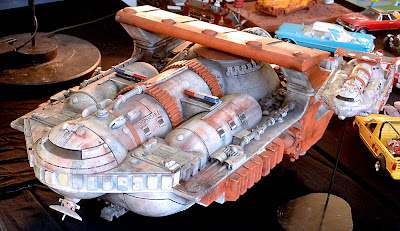 Top of the agenda for many visitors were the 'secret spaceships' - model spacecraft that have appeared in broadcast TV shows. Mat Irvine worked with the BBC for many years, and his comprehensive collection of Visual Effects (VFX) rocketry is one of the very best, so seeing them landed at Spaceport HaMeX was a great hit for science-fiction fans. 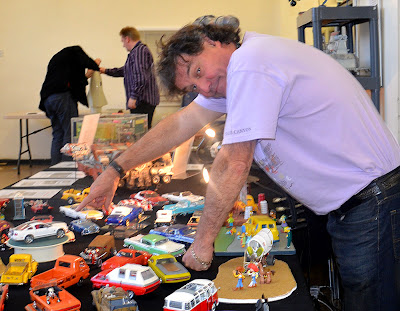 Growing each year
Mat was pleased with the weather: "It was much better than 2010’s cold and frosty nastiness. In fact, conditions for last Sunday’s HaMeX 3 were just right for most, being mild and welcoming." He added: "The event is getting bigger and better too. Most sales tables were pre-booked, and for the first time we had to overflow into the side hall, as well as the main." 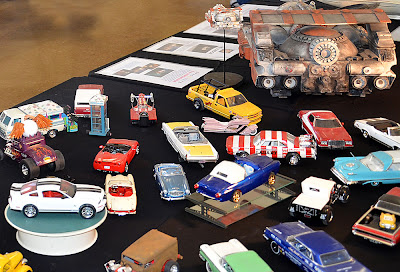 Through the doors
Attendance figures for the show are still to be finalised, but HaMeX was at least as busy as last year, though with an odd division of timings - doors opened at 1000 hr to a quiet start, then from 11-1400 hr the place was heaving. Then numbers dropped off again - maybe the sunny skies outside had something to do with this! 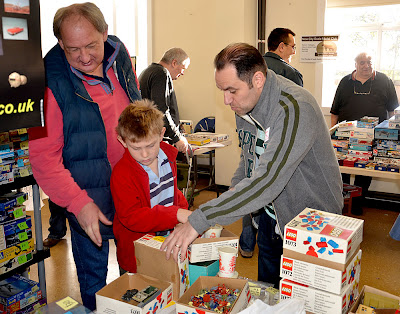 Sixteen model clubs, individuals, and traders were there, most reporting that they had done very well on sales - and all saying they’d had a good time. And organizers Mat Irvine and Paul Fitzmaurice reckon that's a major part of the exercise - it’s about having a bit of fun. Special effects models from TV
VFX models from Mat Irvine (above) included a couple of new-to-HameX spacecraft, the two-seater Bulletcraft from the Blake’s 7 TV series (left) and Dispensable from Space Vets (right). The Liberator Teleport Panel (middle) is a regular show visitor.

Tasty food
According to Mat: "The Hall Committee acted as kitchen chefs, with ‘la spécialité de la maison’ being the droolingly delicious (and famous locally) bacon butties. We reckon our cooks deserve a place on the popular BBC TV series ‘Masterchef’, so thanks to all for such sterling behind-the-scenes service." 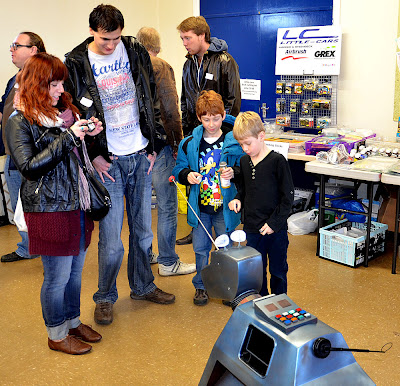 The Doctor Who robot dog K-9 showed off for visitors.

Heads up for the next Expo
HaMeX 4 is already in the 2012 diary, inked in for Sunday, December 2. Meantime, there will be two other shows held before that. 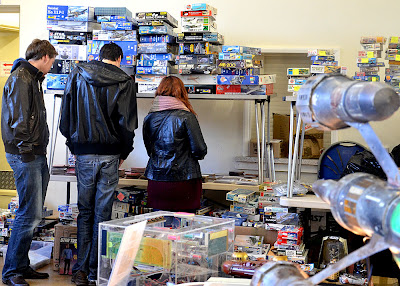 Car and rockets
The first such event will be the popular model car show Automodellismo, to be held on Sunday, April 15. And there’s a brand-new item, slotted for Sunday, July 1. This will be called ‘smallspace’, and will be themed around space, science-fiction and fantasy modelling. Details for the 2012 fixtures are to be finalised, so keep checking in SMN and the HaMeX website for info updates.

Spoiler Alert - smallspace (note the small 's') will tickle your antennas by springing some ‘interesting’ and ‘exciting’ surprises!

Visit HaMeX for details on all shows here.