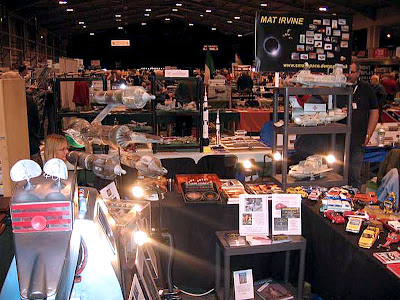 SMN report:
The Scale ModelWorld 2011 Show was a major event last weekend for the IPMS (International Plastic Modellers Society), and a galaxy of models were on display. SMN’s own Mat Irvine was at the show with a stand (above), and all in all, the annual bash went down very well indeed. 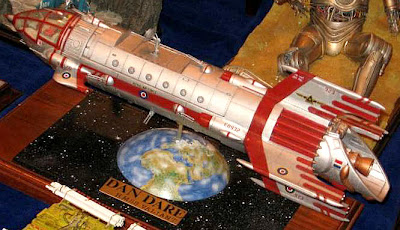 Dan Dare spaceship
SMW 2011 was so packed with stuff that we’ll leave the photo-report to tell the story, but there was one model that caught our science-fiction radar, a spaceship labelled as the Valiant from the classic Dan Dare comic strip. The Valiant was a spacecraft star in the 1953-54 Dan Dare adventure Operation Saturn but, ahem, the one at SMW 2011 didn’t look much like the shapely vehicle drawn by Dan Dare’s creator, Frank Hampson - a good model, just not a replica of the original. 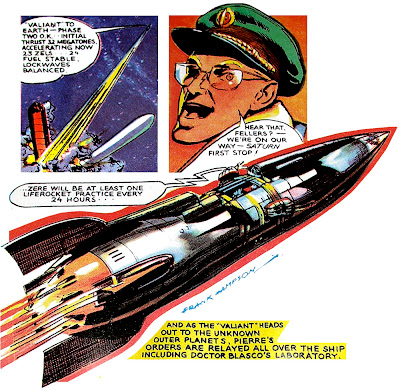 Dan Dare spacecraft heads for the planet Saturn, with US pilot Hank Hogan above.

Spacecraft loaded for action
Hey ho - but the upside is that there’s still room for an accurate Valiant, powered by monatomic-hydrogen engines and armed to the teeth with space-cannon batteries, and the fearsome centrifugal-mortar defence system! Mind you, we’ve yet to see a decent scale model of Dan Dare’s personal spacecraft, the dainty little Anastasia, so we're not holding our breath on this one. Still, here’s hoping...

Photo report from France
We have the French site ‘Modelstories’, run by JC Carbonel, to thank for the photo-report, and there’s a link to visit there later on. Modelstories is well worth visiting in any case for its wide-ranging content, covering any and all aspects of scale modelmaking. 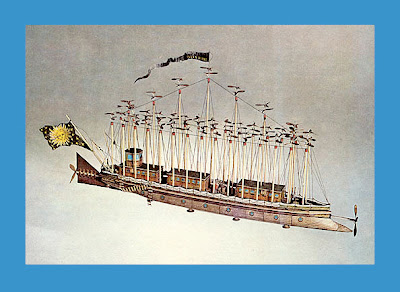 Albatros kit of Jules Verne's Clipper of the Clouds.

Steampunk selection
There’s so much on the site that it’s difficult to point out a single area to home in on, but as confirmed sci-fi and steampunk fans, we have a soft spot for the ‘Maquettes dans l’Universe de Jules Verne et Cie’ section, which covers not only Verne, but HG Wells, Edgar Rice Burroughs and more.

Yahoo’s Babelfish translates this as: “The stand of Chechmate Irvine, former head of the special effects with the BBC (in particular on “Dr. Who”). Chechmate gave the two days a conference on the manufacture of models for the cinema.”

Well ‘Chechmate’, we ‘sorta’ get what it’s trying to say!

Google manages it a bit better: “Mat Irvine's booth, former head of the BBC special effects (including "Dr Who"). Mat gave a two days conference on manufacturing models for film.” 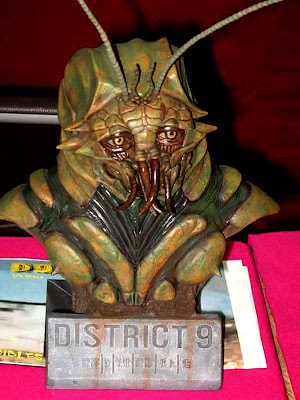 Summation
Great show, huge modelmaking skills, heaps to see and do. Here’s to the 2012 edition! And a salute to Modelstories for the dedication to upload so many pictures.