SMN report:
The cgi images show some of the treats in store for Airfix modelmakers - in particular, we look forward to the new-tool 1:72 scale Fairey Swordfish, also widely nicknamed the ‘stringbag’. The 125-component kit will be a long-overdue replacement for the venerable Airfix offering. We are promised a folding-wing option which represents a major advance, and we’re hoping the 193 mm (7.6 in) wingspan kit will do for 1:72 scale what Tamiya’s superb Swordfish did for the bigger 1:48 scale.

Swordfish versions we’d like to see
In particular, we’d love to see a float-equipped version, complete with beaching trolley, or even mounted on a catapult for a ship-launched Swordfish I. Or what about the radar-equipped Mk III? Or the Canadian Mk IV with enclosed cockpit? The possibilities make the SMN crew drool... 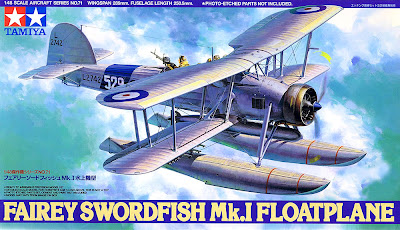 Military duties
The Fairey Swordfish, the legendary 'Stringbag', was a Torpedo, Spotter, Reconnaissance biplane dive-bomber which went into service with the Fleet Air Arm pre-war in 1936. Initially, the Swordfish operated from the large fleet carriers. Later it operated from escort carriers, and were very effective against U-boats.

About that nickname
The nickname 'Stringbag' referred to biplane’s versatility - it could carry an wide and often unlikely combination of loads - and also referred to the jungle of bracing wires between the upper and lower wings, which even then really belonged to a past age of flying.

End of an era
The Swordfish remained on operational duty until the end of World War II, and was the last biplane to see active military service.

Fairey Swordfish by the dozen here.

IPMS Stockholm has a nifty review of the 1:48 scale Tamiya Swordfish here.