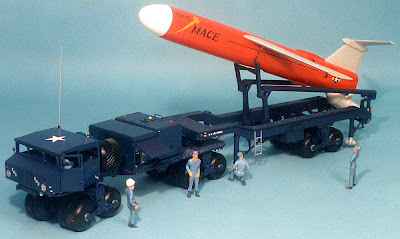 SMN report:
Reference last week’s mention of the upcoming Revell-Renwal Teracruzer and Mace reissue, Mat Irvine has kindly supplied these pictures of an assembled model. We’ve also shown the original box, so you can see the minor differences between the then-and-now kits. 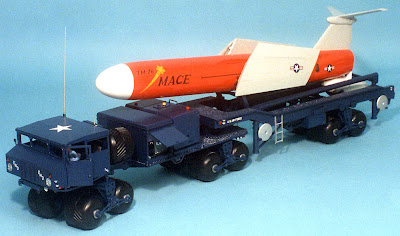 More than just a static model
You can also see that the kit has a classic hallmark of the era - working parts, indicated by the words: “fully operating model” on the box. The Mace can be displayed in a horizontal stored position, or raised into launch-ramp firing mode. In that respect, it’s quite similar to many of the better diecasts of the time, such as the Corgi Bloodhound anti-aircraft missile. 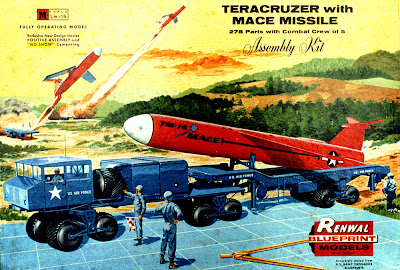 Renwal design features
The Mace shares useful kit-design features with the M65 Atomic Cannon, described by Renwal as “Positive Assembly” and “No Show” cementing. Designed in the first place as helpful aids to younger modelmakers, these are factors that could still appeal to anyone with a shaky hand.

Look out there!
Incidentally, those big, squashy Rolligon tyres on the Teracruzer resulted in an amazingly low ground pressure. At least one launch crew member was recorded as being accidentally run over, with no serious after-effects. The same soldier was able to light up a cigarette from his non-quite flattened pack afterwards - though rather shakily we suspect!

More on kits of the Mace and its predecessor Matador missile, described by the US Air Force as a: “ground-to-ground tactical pilotless bomber” here.