SMN report:
Radio Control is a mega-popular hobby-cum-sport, with the widest possible range of models to choose from - helicopters, combat planes, ships, subs, tanks, cars - you name it, there’s a wealth of choice.

Lightweight polycarbonate
And Tamiya’s latest trio of 1:10 scale RC performance cars carries on the tradition of neat products that look good enough to stand on display when they are not out racing. The lightweight polycarbonate bodies do not feature quite the detail that a heavier injection-moulded kit would give, but no matter - these are first and foremost racing cars! All three models require a separate RC control unit. 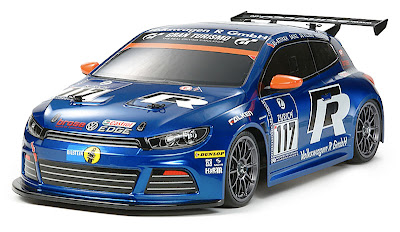 Volkswagen Scirocco GT24-CNG
This is the latest Scirocco design, an elegant looker that looks even better in race markings. The 1:10 scale model is 443 mm (17.4 in) long, and includes details like the rear wing, air vents, and lowered suspension. The kit includes Tamiya’s FF-03 chassis, which provides the Scirocco with realistic front-drive handling, like the real thing. 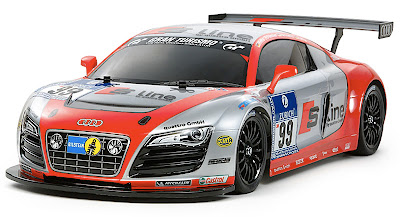 Audi R8 LMS
At 434 mm (17.08 in) the Audi is a little shorter than the Scirocco, and is finished as the R8 LMS, which finished in 2nd place in the 2009 Nurburgring 24-hour event. Like the somewhat better known Le Mans race in France, the German Nurburgring is a major challenge for total vehicle reliability, rather than simply being about speed. In fact, the ‘Ring is perhaps even more of a trial than Le Mans, as the circuit is a constantly changing mixture of ups, downs, bends and straightaways.

Ferrari 599XX
From German racers, we go to Italy, with a Ferrari 599 (top pic), and it’s the longest of these three models, at 448 mm (17.6 in) from nose to tail. The real thing is a Ferrari flagship, dedicated for the track rather than highway. Details on the Tamiya model include small winglets on the C-pillars, hood clips above the nose intake, and decent-looking black race wheels. The model uses the Tamiya TA06 chassis, which features gear-driven rear wheels and belt-drive to the fronts, a neat solution that's reckoned to supply precise power takeup and excellent handling.