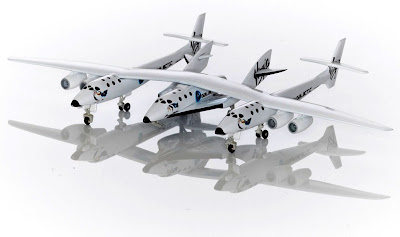 SMN report:
Sir Richard Branson’s Virgin Galactic seems to be on track to become the world's first commercial spaceline, with a passenger-carrying spaceship, the VSS Enterprise, carried by a twin-fuselage mothership, VMS Eve. Both vehicles were developed by California-based Scaled Composites, headed by the veteran designer Burt Rutan. Eventually there will be two motherships and five spaceships in the Virgin Galactic space fleet. 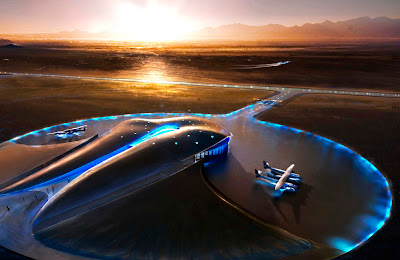 Spaceport America
And now that Spaceport America, Mojave, California, has been opened, the craft have an operating base. It’s the world’s first private spaceport, with a suitably futuristic terminal (above) designed by the internationally famous Foster + Partners. 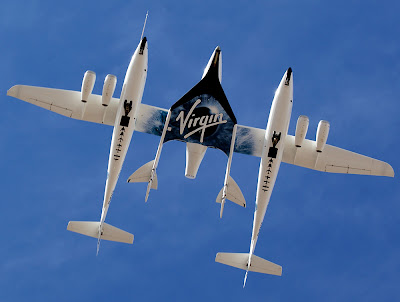 Voyage to the edge of space
Actually, the word ‘spaceship’ is a slight exaggeration, for the Mach 3 craft are not designed to go into orbit, like the winged Space Shuttle Orbiters. Instead they will go just above the 100 km  (61 miles) mark, a somewhat arbitrary height called the Karman Line that’s used to define the ‘edge of space’. But that’s not to be down on the Branson-Rutan achievement - it’s fantastic - and if this writer’s wallet bulged with the $200,000 USD needed for a ticket, I’d be trying on my VG designer spacewear tomorrow! Not that the cost is a barrier for those with deep pockets - more than 400 aspiring astronauts have already plonked down their $20,000 USD deposits. 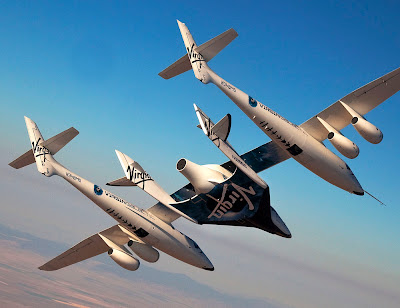 Free of gravity
Let’s not forget too, that the six passengers on each flight will get to experience that magic space-effect, weightlessness. As planned, they will be able to unstrap from their seats, and float around the cabin for six minutes or so. The view should be amazing - looking through the large portholes, they’ll get to see the black of space above, and the curving horizon of our blue marble Earth below. Fabuloso! 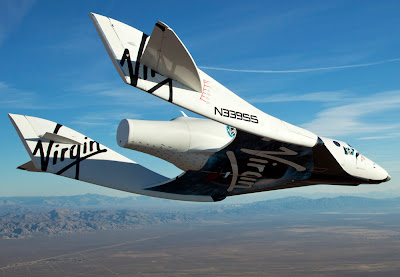 Diecast models
However, for the time being most us will have to be content with a scale model as the nearest we’ll get to the high frontier, so it’s good to see that the first diecast replicas of the two-vehicle Eve-Enterprise configuration are now available through the Virgin Galactic store.

Two scales
There are two models available, one to 1:200 scale, the other 1:400, giving VMS Eve wingspans of some  213 mm (8.39 in) and 106 mm (417) respectively. The four underslung engines on the mothership look accurate enough, as do the general outline and proportions. Perhaps the least convincing parts of the model are the somewhat clunky landing gear components - but that’s common with aerospace subjects in these small scales.

Summation
Whichever of the two models you choose, these are interesting replicas of the leading contender in the race to be the world's first commercial spaceline. The pterodactyl looks of the mothership are well captured, within the technical limitations of metal diecasting. Plastic injection moulding offers more precision though, as well as a chance for a cutaway version, complete with flight crew of two and half a dozen floating passengers. So here's hoping for a kit version to 1:72 scale or even 1:48 very soon.