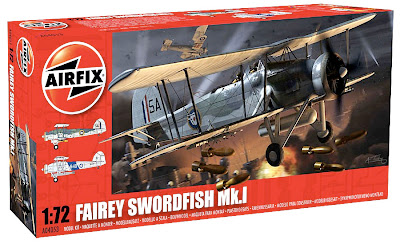 SMN report:
If you’ve time for a last-minute shop for Christmas then the latest Airfix Fairey Swordfish might fit the bill. Newly-released, the attractively-boxed 1:72 scale kit promises to be a quantum leap ahead of the good old girl that many a mature modelmaker assembled in his youth.

Wings back for below-decks carrier storage
Today’s kit has a folded-wings option, which alone makes the kit worthy of note, and, although this kit is still likely to be eclipsed by bigger versions from Tamiya (among others), for anyone with even a passing interest in ‘classic’ 1:72 scale the ‘stringbag’ should be a part of the collection. The cgi images (below) show development drawings of the Airfix Fairey Swordfish. The kit has 125 components, with a 193 mm (7.6 in) wingspan. Yes please!

Early years of World War II
This special Airfix set celebrates the achievements of four airmen who were awarded the VC (Victoria Cross) whilst serving with the RAF in World War II. The box is an ideal gift, as there are four aircraft from the war’s early years, plus for younger modelmakers, also included are two paintbrushes, 12 pots of paint, a tube of cement, plus full details of the plucky actions of four brave airmen. The kits are: 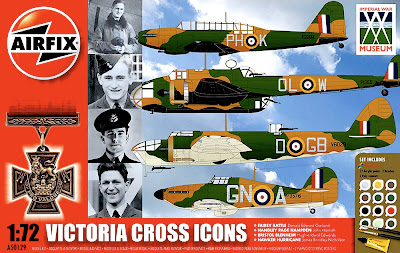 Bristol Blenheim: Hughie Edwards
Awarded the VC for leading a bombing raid against the port of Bremen, Germany. He survived the war.

Handley Page Hampden: John Hannah.
Awarded his VC for gallantry in tackling a mid-air blaze, caused by anti-aircraft fire during an attack on Antwerp, Belgium.

Hawker Hurricane: James Nicholson.
Awarded the VC after shooting down a Bf110 while his Hurricane was on fire. He survived the attack, but was badly burnt.

Summation
None of these kits is leading-edge in any way - in fact, the Handley Page Hampden is just the opposite. However, only the Hurricane is widely available in model form, so from that point of view alone, the other three are well worth having and make a historically valuable trio, with the Hurricane pitching in as a useful bonus for comparison.


ModelZone is selling this set here.