SMN report:
Here’s a challenge for the kit-basher kings and paint-masters among you - it’s Boeing’s latest 777 twin-jet for ANZ (Air New Zealand), painted in midnight black to toast the World Champion All Blacks rugby team. Not only does the special scheme look great, but it makes the 777 the world’s largest airliner ever painted in an overall black finish. You can see the rollout on video, together with two All Blacks players, after the jump.

All Black player
Making the trip to Boeing’s Seattle plant to see the 777 emerge from the paint shop were two All Blacks players, including the No 8 loose forward, Kieran Read, who reckoned that: “It’s a sensational looking aircraft and will really turn heads at airports around the world.” He added: “I reckon they should paint all their planes like this!” 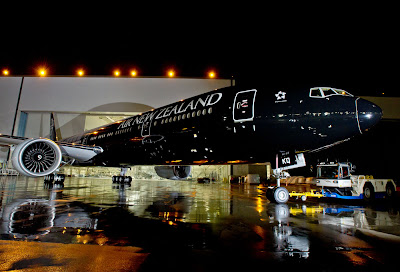 More All Black planes on the way
In fact, Kieran’s going to have at least some of that wish granted, as by mid-2012, ANZ is aiming to have half a dozen planes painted in the in the same scheme, including a pair of Airbus A320s and three Beech 1900D turboprops.
Long job
The special paint job took Boeing just over a week to complete - two days longer than a standard 777 airline scheme - and it took 14 painters to finish, working 24-hour shifts. Boeing VP Jeff Klemann decided that it was: “Without a doubt, one of the most challenging paint jobs we’ve ever done.” Hey, but they did good!

Hot or not?
Most jetliners are painted in white, to reflect the sun’s heat in the air. By that standard, you’d think the All Blacks 777 would be a hothouse for those inside, but testing has proved that the hundreds of onboard TVs for the passenger entertainment system create more heat than the black paint.

Scale model 777
What about models? Well, so far as kits go, the 777 has not been widely modelled, and of those, the SMN fave is probably the 1:200 scale Hasegawa release. Not that we particularly like that scale - it’s just a bit small really, and doesn’t allow the sort of detail that sits well under the SMN microscope. Mind you, if you plan a one-off All Blacks scheme of your own, 1:200 is perhaps less of a challenge than bigger scales.

Decal sheet demand
Let’s hope an aftermarket supplier has a go at producing a decal sheet though, as this one would look excellent on the display shelf.

All Black video
Meantime enjoy this video, featuring the two All Blacks players, Kieran Read (the tall one) and Andy Ellis (watch for those catches in the hangar) and crank up your sound system for the backing track, featuring the cool sounds of luscious New Zealand singer-songwriter Annah Mac. She can sing in SMN Towers just about any time she likes...