SMN report:
The final part of the current Batman ‘Dark Knight’ movie trilogy is heading our way next summer, and The Dark Knight Rises will bring a host of techno-treats by way of new and updated crime-zapping machinery for our caped crusader. And that means there'll be new movie tie-in Batman kits, collectibles, diecasts, and RC equipment on release soon. 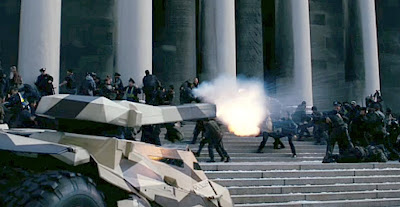 Blow the bad guys away
In 2012, the splendid Tumbler Batmobile gets an update in the form of a powerful top-mounted cannon, mated to a nifty camouflage paint job instead of the familiar midnight-black. Designwise, the square barrel of the cannon could be the hallmark of an electromagnetic railgun launcher - but the muzzle flash indicates motive power from old-fashioned cordite. Still, who cares - fiction or not, it looks a terrific piece of hardware and we can’t wait for the kits and diecasts to arrive.

Bat attack craft
Also featuring in The Dark Knight Rises will be a great-looking air attacker, likely the next Batplane, which seems to be a mixture of Tumbler visual style, cross-pollinated with hardware concepts from Avatar, Transformers, X-Men and the like. Superb stuff: fellow sci-fi buffs, it looks like we’ll be well served during the course of 2012. 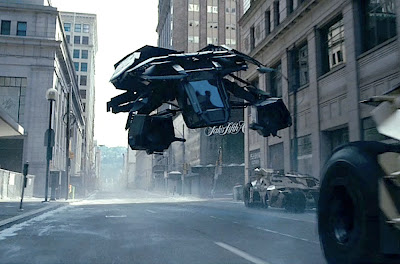 Hot Wheels Tumbler
Meantime of course, there are plenty (plenty!) of Batmobiles already out there, and a few hours of Christmas kitbashing could take that turret-equipped Tumbler from movie screen-grab to scale-model reality in fairly short order. Among our fave diecasts of those presently available is the Mattel Hot Wheels diecast version to 1:18 scale, which captures the complex planes of the movie car very convincingly. 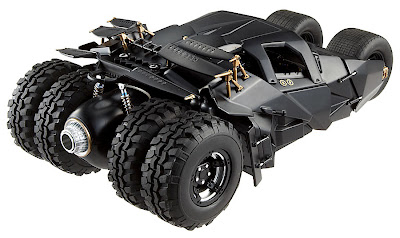 And here's The Dark Knight Rises trailer. Looks good, and you can see the cannon-equipped Tumbler in action near the end.